Guest post by Jeffrey Liker and Timothy Ogden, authors of Toyota Under Fire.

The greatest recession since World War II followed by one of the largest recall crises in automotive history followed by the worst earthquake of the century in Japannot a fun 3 years by any standards.  One would think Toyota has been seriously weakened, perhaps permanently.  Certainly it is bruised, but by no means down for the count.  By the fall of this year we expect Toyota to be firing on all cylinders poised for further innovation and growth.

The reason is simple. As we documented in Toyota Under Fire, the company has used crises as opportunities for investment and improvement rather than retrenchment. Instead of cutting its losses, it has invested in its most valuable asset: highly trained team members from the shop floor to the top of the engineering ranks.

Using the Recession as an Opportunity

For instance, rather than reacting to dramatically lower demand by cutting thousands of employees, Toyota used the recession as an opportunity to do needed training and improvement activities after years of running full throttle.  Even though the facts ultimately absolved Toyota of all serious claims of runaway, unstoppable cars, (not only the NHTSA/NASA report, but by the fall of 2010 Toyota led virtually all objective quality surveys like Consumer Reports and J.D. Power) the company made major investments to improve engineering processes and become more responsive to customers.  The earthquake didn’t have much direct effect on Toyota plants or their immediate suppliers, which are in the Nagoya area of southern Japan, but basic inputs like rubber parts, paint chemicals, and microprocessors were ultimately sourced from plants in the north that were badly damaged and in some cases shut down.  Toyota sent hundreds of engineers out on field visits to make sure that each and every damaged plant got a first-hand assessment. These engineers also got their hands dirty, working with plant managers wherever they could to get the plants back up and running.

Toyota expects to return to full production by the end of 2011, but considerable progress has already been made.  Only 25 parts remain in short supply and North America by June (two months earlier than thought) will be at 100% normal production of eight of the 12 models manufactured in the region while Europe will be at full production for all models.  As in the recession, rather than layoff idle workers, the company took advantage of plant downtime when they lacked parts to do more training and kaizen so quality, productivity, and employee safety will be even higher than before the slowdown.

Toyota has defied conventional wisdom in the ways it has responded to crises over the last five years and that’s going to help defy the conventional wisdom on how weakened the company must be. The company has continued to invest in a culture of committed and engaged employees in every department, at all levels, that will enable them to continue turning crisis into opportunity and emerge stronger.

Timothy Ogden is an executive partner at the communications firm Sona Partners. He has written for Harvard Business Review, Miller-McCune magazine, and Alliance magazine and is frequently quoted in The New York Times, Chronicle of Philanthropy, The Wall Street Journal, and Financial Times. 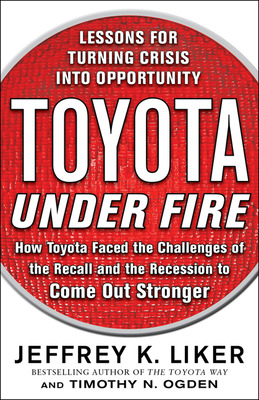