Excerpt from Think, Act and Invest Like Warren Buffet, by Larry Swedroe.

Whats most interesting is that despite the great rally since March 2009 (the greatest rally since the 1930s), investors pulled more than $150 billion from U.S. stock funds during each of the past three years. Unfortunately, this kind of misbehavior is typical. They tend to buy only after periods of strong performance and sell after periods of poor performance. Thats why studies show the investors tend to underperform the very funds in which they invest.

Its easy to understand why investors got it wrong. Not only were investors having to deal with negative headlines such as our debt downgrade and worries about the fiscal cliff, they also had to listen to the dire forecasts of so-called experts like Meredith Whitney, Nouriel Roubini and Bill Gross. In 2010, Whitney scared municipal investors with her forecast of hundreds of billions in municipal bond defaults. In March 2009, just as the markets were set to begin their rally, Roubini predicted that stocks would drop another 20 percent. Gross coined the phrase the New Normal, meant to describe a new environment that would last years, if not decades, when risk taking in stocks simply wasnt going to be rewarded.

Both the stock market and the municipal bond market have ignored Whitney, Roubini and Gross. Unfortunately, investors didnt. They sold off stocks and municipal bonds in record numbers, missing out on the strong returns more disciplined investors earned. And the great irony, which I point out in my new book Think, Act, and Invest Like Warren Buffett, is that while investors idolize the Oracle from Omaha, they ignore his advice to ignore all market forecasts, because they tell you nothing about the direction of the market.

The winners game in investing is played by having a well-develop plan, one that focuses on managing risk, instead of trying to manage returns. Having that plan and sticking to it, like a postage stamp sticks to its letter until it reaches its destination, is the key to investment success.

Larry E. Swedroe is a principal and the Director of Research for the BAM Alliance. He has also held executive-level positions at Prudential Home Mortgage Citicorp and CBS. Swedroe frequently speaks at financial conferences throughout the year and writes the blog “Wise Investing” at CBSNews.com. 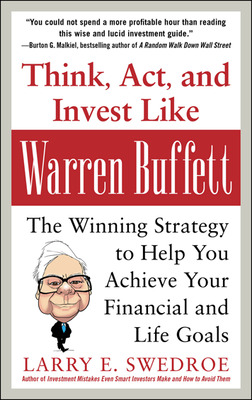