Why, when under stress does one person whine, another attack, another withdraw, while others get passive aggressive?

In order to understand workplace behavior and what motivates it, one must observe coworkers actions through a Lens of Understanding, first reflecting upon these four influential factors in human behavior: Organizational culture, job function, the people around us, and personal programming.

Organizational culture consists of behaviors both good and bad, that are considered acceptable and forbidden.

When I presented seminars for IBM’s leadership series I talked about the grenade tantrum, when an employee has an out-of-control explosion with elements that have little or nothing to do with present circumstances.  Consistently half the IBMers in the room would say I cant imagine somebody doing that at work. While the other half of the room would say, Oh yes they do!

A second factor is job function. Professional nurses for example are often on the front line, knowing what needs to be done but trumped by doctor who are Tanks (someone who asserts control through aggression and a single-minded focus) or Know-it-alls (someone who is very controlling, with a low tolerance for correction and contradiction) and limited by a hospital bureaucracy.  The result of that equation is a feeling of being helpless.

A third factor that influences behavior is the people around us. Whining, Negativity and Sniping are virulent and spread like the flu. Before you know it, everyone is doing it. Have you ever noticed how one department can have an ongoing sniping relationship with another department? Other difficult behaviors may not replicate but they still cause problems. Put a Know-it-all on a team of people and watch everyone turn into Nothing people who wont speak up or contribute at meetings.

And of course each of us individually comes wired with some tendencies for where we believe we fit.

To prevent negative behaviors and move people into the Cooperation Zone, one must:

1. Recognize where people are behaviorally in the Lens of Understanding.
2. Recognize the factors influencing behavior of job function, organizational culture, and team members.
3. Know the strategy to transform their behavior. Communication is like a phone number. You need all of the digits and you need them in the correct order for your call to go through.

Dr. Rick Brinkman is the coauthor of the international bestseller Dealing with People You Can’t Stand which has been translated into 25 languages. He is a top keynote speaker and trainer on leadership teamwork customer service effective meetings difficult people and managing multiple priorities. Dr. Rick Brinkman is best known for his Conscious Communication® expertise conveyed to millions of people via keynotes and trainings, radio, television, print interviews, and numerous award-winning books, videos and audio programs. He is also co-author of the international bestselling book, Dealing with People You Can't Stand: How to Bring Out the Best in People at Their Worst, which has been translated into 25 languages. 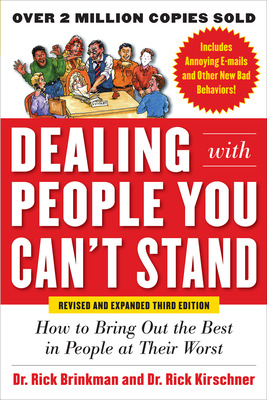