Guest post from Becky Shambaugh, author of Make Room for Her.

The recent firestorm of controversy surrounding Facebook COO Sheryl Sandberg in advance of her forthcoming book, Lean In, has me completely baffled. Somehow, what started as a productive discussion about a critical problem in our country and the world  the lack of women in senior leadership  has morphed into a debate about feminism. Much of the controversy centers on whether someone with Sandberg’s wealth, power and position should be giving regular women advice on how to get ahead in the workplace.

With all due respect to those who have written about and discussed this issue, I’d suggest that they are missing the point! Rather than minimalizing the issue by debating Sandberg’s merits as an author on the topic of women in leadership, we should be discussing how we as a society can help talented and qualified women advance to senior leadership positions in business and government. We need to stop arguing about the who and the why and focus on the how.

To be fair, a few who have chimed in on this topic have discussed the “how.”  Sandberg argues that the primary reason women are not advancing is because they sabotage themselves.  On the other hand, Princeton professor and former State Department official Anne-Marie Slaughter places the blame for the lack of women in senior leadership squarely with the organizations who employ them and with policymakers who fail to enact legislation to support them.

Those who place responsibility solely with women or solely with organizations are missing another key point. The reality is that the solution to the lack-of-women-in-leadership problem is not either/or, it’s and. It’s not either women or the organizations they work for. It’s both and it’s men as well! Building gender-balanced leadership teams requires a holistic approach. It’s not about fixing women, women’s leadership development programs or diversity quotas. And it’s not just the responsibility of Human Resources, although they certainly play a key role. Integrated Leadership, as I refer to it, is a three-legged stool  women, men and the organizations for which they work must all play a role in the solution.

I concur with Sandberg that women often hold themselves back. For more than a decade I’ve worked with women to help them get off what I call the sticky floors of self-limiting assumptions, beliefs and behaviors that prevent them from realizing their potential and moving to higher levels of leadership. I also agree with Anne-Marie Slaughter  the importance of the organization and its top leadership cannot be underestimated when it comes to building gender-balanced leadership teams. Organizations must create an inclusive culture that values gender intelligence and proactively seek ways to advance more women into senior leadership.

Yet one of the main reasons we have not increased women’s representation in leadership over the last several decades is that we have missed or neglected a key piece of the puzzle:  men! Men have often been blamed as perpetrators of the glass ceiling or, at a minimum, have been pushed to the sidelines with respect to advancing women. As a result, they have perhaps become apathetic about supporting women. Yet men, who represent over 80% of senior leadership and corporate boards, are in the very best position to help women advance to the top leadership ranks. Unlike many who see men as part of the problem, I believe men are a big part of the solution. We need to tap into men’s knowledge, experience and insights, as well as their goodwill. It’s time for men to actively participate in the process by coaching, mentoring and sponsoring women and by acting as change agents within their teams and organizations.

While I’m encouraged that this crucial topic is finally garnering the attention it so deserves, we need to move the discussion back to the real gist of the issue: finding solutions for creating the gender-balanced leadership teams that produce better outcomes. Then, we must go one step further and move the issue from conversation to action.

It’s time for everyone  women, men and organizations  to work together to create gender-balanced leadership teams.

As president and CEO of SHAMBAUGH, Rebecca has worked with clients including Pfizer Oracle Marriott IBM Cisco the Department of the Interior Dow Chemical Johnson & Johnson MetLife Microsoft and KPMG. She is also the founder of Women in Leadership and Learning (WILL), the first executive leadership development program in the country dedicated to the research advancement and retention of women leaders and executives. As president and CEO of SHAMBAUGH, Rebecca has worked with clients including Pfizer Oracle Marriott IBM Cisco the Department of the Interior Dow Chemical Johnson & Johnson MetLife Microsoft and KPMG. She is also the founder of Women in Leadership and Learning (WILL), the first executive leadership development program in the country dedicated to the research advancement and retention of women leaders and executives. 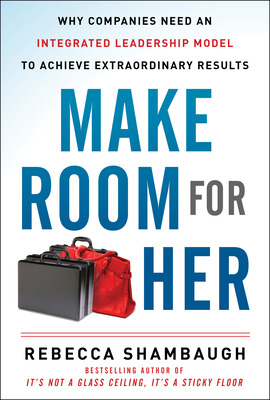