Excerpt from The Dividend Imperative: How Dividends Can Narrow the Gap between Main Street and Wall Street by Daniel Peris.

In early 2011, I published a book The Strategic Dividend Investor that argued that investors should focus on dividends if they wanted to enjoy superior returns from their stock portfolios. At the time, the U.S. stock market had been offering investors a dividend yield (annual dividend/stock price) of 2% or less for over a decade, and the dividend payout ratio (dividends/profits) for the S&P 500 Index companies was around 30%. I pointed out that both of these figures were well below what they had been historically and what they ought to be from a financial math perspective. In that light, long-term investors would be well served to return their focus to dividend-paying and dividend-growing equities. Indeed, long-term returns were dominated by dividend payments and the growth of dividends, and dividend-focused portfolios had handily outperformed non- or low-dividend alternatives over all but the shortest measurement periods. Two years later, the situation remains little changed. If anything, as interest rates have moved even lower and the baby boomers have edged two years closer to retirement, the need for income by large swathes of the populationretirees, endowments, pension funds, etc.has become even more pressing.

This volume builds upon the first to address a much broader and arguably a more important issue: corporate America needs to pay higher dividends. At a time when the capital markets seem to alternate between scandal (Madoff, mortgage-backed securities, insider trading) and bubble (social networking companies like Facebook, Groupon, and their ilk) and are broadly distrusted by the public, a greater focus by Wall Street on dividends rather than just share prices would be good for everyone involved. Indeed, the toggling from bubble to scandal and back again is not accidental. It is evidence of the capital markets not working as well as they might. Given that business performance is cyclical and that the humans who make up the stock market have greed and fear and emotion in abundance, the cycle of boom and bust is not likely to cease anytime soon, but a greater reliance on using the stock market as a business investment platform, rather than as a grand casino available to all, would go a long way toward tamping down that volatility. Its easy to oversell an idea, and dividend payments from large, mature, publicly traded corporations are not a panacea for all of our financial and corporate ailments. In a back to basics period, however, putting our investment return expectations more rather than less on a cash basis would be a substantial improvement over the current situation, which is driven almost entirely by speculation in the price of stocks rather than by the receipt of cash distributions from ongoing enterprises.

What.s at stake? In 2011, it was around $480 billion. Over the past decade, it was over $3 trillion. Thats the amount of money that could have been paid by S&P 500 Index companies in dividends to investors and was instead redirected elsewhere, to share repurchase programs. Thats a sum large enough to interest the average investor and businessperson. But there is more to it than that. As I argue in the final chapter, whats really at stake is the trust relationship between Wall Street and Main Street. The year 2011, when The Strategic Dividend Investor was released, was one of protests against Wall Street excesses. The narrative of the 1% versus the 99% carried over into the 2012 presidential election. In that context, it might seem peculiar to be suggesting dividends would be part of the solution to the perceived failure of the capital markets to serve the best interests of the economy and the society at large. Or to put it another way, arent dividends the problem, and should we really concern ourselves with what made Mr. Rockefeller happy? It may strike some as a radical notion that dividends are not the problem, but part of the solution. The abuses in the stock market, and the misperception of stocks in general, are the main culprit, not the underlying businesses that feed, house, and equip our society and employ our workforce. And it is those businesses that quite properly ought to distribute their profits in the form of dividends, not only to the Rockefellers, but also to Main Street shareholders.

Consider this then a wake-up call not only for investors, but also for corporate America, and the Wall Street that lives off both. After a 30-year drop in the dividend payout ratio I call it here the Great Retreat it’s time for senior executives and board members to step back and clearly, soberly examine how they allocate capital and what they do with the profits that their businesses generate. This work [The Dividend Imperative] is my contribution to that debate. It is avowedly polemical, making assertions that will be dismissed out of hand by more than a few traders, hedge fund managers, and investment bankers who like things just the way they are. So be it. Those individuals notwithstanding, the issues raised here should be top of mind for Main Street investors and high on the agenda of the company directors and officers purporting to be acting in their interests.

Daniel Peris is a senior portfolio manager at Federated Investors in Pittsburgh. Trained as a historian Peris is also the author of The Strategic Dividend Investor. Find out more at www.dividendimperative.com.

Daniel Peris is a senior portfolio manager at Federated Investors in Pittsburgh. Trained as a historian Peris is also the author of The Strategic Dividend Investor. Find out more at www.dividendimperative.com. 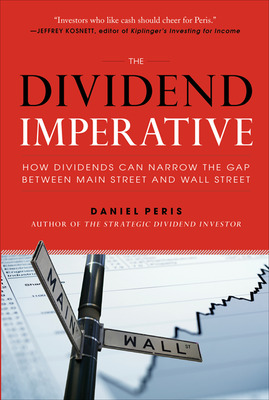