The traditional performance review is frozen in time (about 1970, in fact).  Its design is outdated  rate employees innovation skills from 1 to 5  and its implementation is typically mediocre. Unless you fix it, your company itself will perform (as the review itself might say) below expectations.

The most destructive flaw in a traditional performance review is its single point of failure, which is the managers skill at judging performance and communicating ways to improve performance. Even a painstaking performance review format can do more harm than good in the hands of an unskillful manager. Its simply impossible for a single manager to observe the day-in-day-out performance of every team member.  This forces many managers to rely on blunt performance measurements like average call waiting time or number of units produced per hour.

In todays global economy, theres no room for such an antiquated system. How can leaders measure the valuable qualities of a modern work group, including creativity, innovation, problem solving, and teamwork? If your workplace lacks creative spirit, how can you measure the non-existent revenue or cost containment that creative problem-solving would otherwise produce?

The solution is to spread responsibility for performance reviews among every member of an organization through crowdsourced feedback and recognition (via a system of social recognition). This means that everyone is responsible for noticing, recognizing and commenting on positive work behavior on an easy-to-use system (similar to social networking but confined within company walls). Ultimately, this system informs the manager in detail about individual performance, and the manager adds this rich collection of stories to traditional performance measures like those mentioned above to make a final performance assessment.

Combining the wisdom of crowds, the human need for social interaction, and the power of big data analysis, the crowdsourced performance review can bring the performance review process forward from its current ineffective state to take its place beside the best Human Resources has to offer today.

Eric Mosley, author of The Crowdsourced Performance Review, is the co-founder and CEO of Globoforce. Eric has been directing the path of Globoforce as the innovator in the recognition industry since the company’s beginning.  Eric’s work has been published in such publications as Harvard Business Review, Fast Company, Forbes, and Fortune, and he has also presented at industry and investment conferences around the world. Eric Mosley is an HR visionary, author, and the force behind the WorkHuman movement. As CEO and co-founder of what began as Globoforce and is now Workhuman, he is leading the charge to dismantle old HR processes and challenge organizations to build new ways to connect the modern workforce. He guides organizations worldwide on how to create more human-centric workplaces that leverage the way people work today, which is around employee development, social connections and relationships, and organizational communities and teams. As a pioneer of the Workhuman movement, Eric has long believed that recognition and positive reinforcement unleash discretionary energy in employees, inspiring them to do the best work of their lives. Employees achieve their fullest potential when they feel appreciated, connected, and empowered for who they are and what they do. Eric is the author of “The Crowdsourced Performance Review” and co-author of the award-winning book, “The Power of Thanks.” He is also a regular contributor to The Huffington Post on the topics of recognition and humanity in the workplace, and a frequent contributor to publications including Forbes, Fast Company, and the Harvard Business Review. 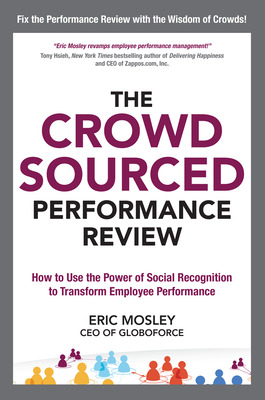