Excerpt from Repeat the Remarkable by Perry Holley.

Another Time and Another Ship

The year was 1997, and the naval warship U.S.S. Benfold was labeled one of the worst ships in the navy. By worst, it is said that the ship and crew were dysfunctional and unprepared to go to war. “The dysfunctional ship had a sullen crew that resented being there and could not wait to get out of the Navy,” was how Captain D. Michael Abrashoff described the situation in his book titled It’s Your Ship.

In the 20 months that Captain Abrashoff was captain of the U.S.S. Benfold, he and the crew were able to take the ship from worst in the navy to first in the navy and have their performance in naval exercises and war be described as remarkable. Captain Abrashoff learned early that his success in delivering remarkable performances would be heavily dependent on his skill as a leader and his ability to inspire his crew. He immediately began to set a tone of being more interested in achieving results than getting salutes. Traditional military command and control leadership was not what the Benfold needed. Abrashoff realized that his crew was closest to the action and procedures on the ship, and they therefore needed to feel that everything on the ship was their responsibility. This is how the Benfold watchword (and the title of the book) became It’s Your Ship.

The differences between the Vasa and the Benfold are startling. In this comparison, there are many lessons for us to apply to our understanding of how to earn the label of “remarkable.” As we progress through this book and its lessons about being and leading remarkable, we will unpack many of these rich truths.

A Message from the Vasa and Benfold

This tale of two ships provides us with many lessons when it comes to delivering and leading remarkable performances. As a leader, the message we want to embrace is:

The line between being remarkable and being a shipwreck is a very fine one for sure. It is so fine, in fact, that it is often undetectable. Rather than slipping into autopilot and doing things “the way they have always been done” – thus defaulting into repeating bad behaviors – we actually need to make conscious choices in order to change and achieve remarkable. Being able to recognize that being remarkable requires doing things differently is one of the greatest lessons you will find in this book.

Perry Holley is a program director with IBM Leadership Development. He serves and leads global teams their managers and top executives in developing and repeating remarkable performances.
? Perry Holley is a program director with IBM Leadership Development. He serves and leads global teams their managers and top executives in developing and repeating remarkable performances. 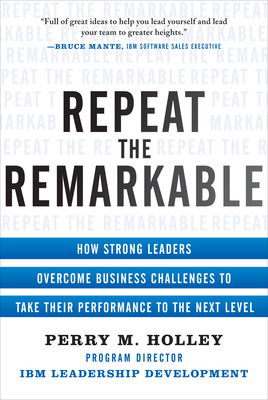