Guest post by Geoffrey Tumlin, author of Stop Talking, Start Communicating: Counterintuitive Secrets to Success in Business and in Life.

As the holidays approach, unpleasant memories of last years office holiday party may still linger in many of our minds. Who can forget when Julian from accounting told the vice president of finance that he was bored with accounting, hated everyone in the department, and wanted to get into operations? (The VP certainly hasnt forgotten.) And remember how awkward it felt when Sarah from marketing cornered you by the punch bowl and wouldnt stop talking to you (loudly!) about the rumors surrounding a coworkers recent absence? Or the discomfort you felt when you couldnt recall Bills name as you attempted to introduce him to your boss?

If thoughts of this years party make you uneasy, says Geoffrey Tumlin, youre not alone. For many, the office holiday party is an anxiety-provoking festival of faux pas, awkwardness, and other embarrassments. Its the one party of the year that we cant wait to end.

Because of the awkward conversations, forgotten names, and a handful of inebriated coworkers, office holiday parties often create as much stress as they are supposed to relieve, says Tumlin.

The reasons these parties are so stressful are simple. In many organizations, the company holiday party is one of the few times of the yearand possibly the only timewhen large groups of employees get together socially. The unusual nature of the gatheringtheres often an audience, youre moving from person to person, and youre making much more small talk than usualpresents communication challenges that more routine workplace communication doesnt.

The key to successfully navigating the office holiday party is to play a defensive game, asserts Tumlin. Stop thinking about growing your network at the holiday party and start thinking about protecting the network youve already got in place by minimizing the chance of getting tangled up in awkward or embarrassing conversations.

Thats where Stop Talking, Start Communicating comes in. Full of counterintuitive yet concrete advice, it draws on Tumlins considerable experience as a communication consultant to show readers how to avoid landmines at this years office holiday party and prevent career-damaging incidents around the holiday punchbowl.

The lubricating effect of alcohol is largely responsible for many holiday office party communication disasters. It was the cause of Matts disclosure of inappropriate office gossip during the party of 2010, for Jim complaining a bit too loudly about your boss back in 2011, and for Julian the accountant blabbing to the VP of finance that he wanted a more exciting career during last years party.

I hate to be a spoilsport, but nothing reduces office party incidents as effectively as steering clear of booze and the people whove had a bit too much of it, says Tumlin. One of the main reasons for verbal blunders at company holiday parties is that alcohol lowers our inhibitions, which erodes both our conversational restraint and our self-monitoring ability. Loose lips cause many verbal slips.

But what if your boss is pressuring you to drink? Theres no easy answer for a boss whos encouraging you to drink, notes Tumlin, but you do have options. You can get a drink and nurse it, or get a drink and say you need to say hello to someone. Or you might say that you dont feel like drinking, either because you dont feel well, or simply because you just dont want to drink on this occasion.

Avoid the person whos had too much to drink as much as you can, he adds. Communication is much more unpredictable when people have had a few drinks, and theres much more downside than upside when inhibitions are loosened in a professional setting.

The graceful exit is another highly effective office party strategy. Timely exits are great office party tools, Tumlin asserts. Knowing how to extract yourself from awkward or embarrassing conversations minimizes trouble and shortens problematic interactions at the company party.

You can tactfully break contact by excusing yourself to the food line, to the restroom, or by saying that you need to say hello to someone (your boss is often a good excuse). But if someone is causing a disruption thats leaking out to other people, dont worry about being tactfuljust make a quick exit.

Break contact with people who are disrupting the party ASAP, says Tumlin. Dont worry about following social etiquette if someone has already thrown good manners to the wind. Hes already abandoned normal social behavior, so you dont owe him the courtesy of a tactful exit.

No one likes to draw a blank on a name we should have known. Fortunately, you can avoid many uncomfortable moments by recalling, just before the party starts, names of people you expect to see. The best way to increase the odds of remembering a name is to put it at the front of your mind before the interaction, says Tumlin. Take five minutes before the company party to think through the names of people who are likely to be there. Its a simple but powerful way to decrease the number of times you blank on a name you should have known.

If you end up stumped on a name at the party, ask early in the conversation for the name you cant recall, he adds. Say something like Please tell me your name again as soon as you realize that youve forgotten the name. The longer a conversation goes, the more awkward it becomes to ask for a name that isnt on the tip of your tongue.

But what about the dreaded party introduction, when your spouse or a colleague is standing beside you and a third personwhose name youve unfortunately forgottenis clearly expecting an introduction? Dont sweat it, says Tumlin. Theres an easy solution to this common dilemma.

You can eliminate the dreaded party introduction and a number of other awkward incidents by establishing a few conversational moves with your spouse or with a partner before the holiday party.

Develop a plan with your spouse or with the coworker youre attending the party with to automatically introduce themselves whenever you hesitate for a moment upon encountering someone new, advises Tumlin. This will trigger a reciprocal introduction and, crucially, will produce the name you cant recall. Once you have the name, you can always follow up with an apology for not introducing the other person if you like. For example, you might say, Im sorry, Jim, I should have introduced you two, or, My apologies, I thought you knew each other.

A good partner can also get you out of all kinds of company party jams, he adds. Your spouse or your party partner can be the person who asks for both of you to be excused from an awkward or a dwindling conversation by suggesting that you head to the food or drink line, or by asking for you to introduce him or her to your boss, says Tumlin. Use a partner at the holiday party to give you the reasonable external excuses you need to tactfully get out of conversations, and let your partner help you move along if youve lingered too long in one discussion.

Its a good idea to offer holiday greetings to your colleagues, your direct reports, and your boss, but dont seek out all of the head honchos and try to give them yuletide greetings at the company party.

The most senior people often get hounded by people currying favor at the holiday party, says Tumlin. If a natural conversation emerges with someone from Star Fleet Command, thats great. But dont stand in line to talk to someone you barely know. Shes probably trying to enjoy the party and would almost certainly prefer to be left alone. Greet your boss and, perhaps, your bosss boss. After that, relax and be open to any other conversations that may come your way.

Scale back your expectations about the company holiday party, he adds. Worry less about who you need to meet and what you need to say. Focus more on minimizing awkward conversations and enjoying as much of the gathering as you possibly can.

The office holiday party shouldnt be something we dread, says Tumlin. This year, lay off the juice, master the exit, review a few names, partner up smartly, and think about the party as a celebration and not as a Santa-themed networking event. With a little bit of luck, this years company holiday party will be unremarkable, and might even be enjoyable.

Geoffrey Tumlin is CEO of Mouthpeace Consulting LLC a communication consulting company and president of On-Demand Leadership a leadership development company. A portion of the author’s royalties will be donated to Critical Skills Nonprofit a 501(c)(3) public charity founded by the author to provide communication and leadership skills training to chronically underserved populations. Geoffrey Tumlin is CEO of Mouthpeace Consulting LLC a communication consulting company and president of On-Demand Leadership a leadership development company. A portion of the author's royalties will be donated to Critical Skills Nonprofit a 501(c)(3) public charity founded by the author to provide communication and leadership skills training to chronically underserved populations. 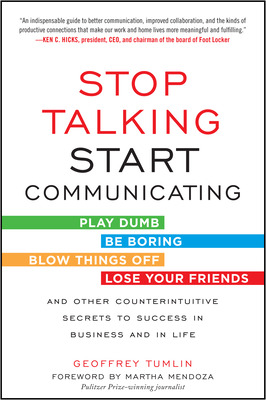