Guest post by Doug Lipp, author of Disney U.

That’s what storytellers do. We restore order with imagination. We instill hope again and again. Tom Hanks, in his portrayal of Walt Disney, uttered these words in one of the most poignant scenes in the just-released Disney film, Saving Mr. Banks. This comedic drama sheds light on the challenges Walt Disney faced convincing novelist P.L. Travers to sell him the rights for a film adaptation of her book Mary Poppins.

Whether or not Walt Disney actually used this phrase with Mrs. Travers is irrelevant. Indisputable is that Walt Disney was a masterful storyteller. His ability to create vivid images, through words, drawings and film, transformed countless ideas into reality. Absent Walts talent for storytelling, his dreams of creating the Oscar Award winning Mary Poppins, or a theme park called Disneyland, wouldnt have come true.

Equally important is Walts brilliance as a leader; he surrounded himself with staff similarly adept at igniting passion through stories. Throughout Saving Mr. Banks are engaging scenes depicting how Walt relied upon the songwriting prowess of composers Richard M. and Robert B. Sherman to transform Mary Poppins from words in Travers book, to a vibrant character on film.

Van France, founder of the Disney University, was an equally talented storyteller. Walt hired Van in 1955 to transform a group of young Californians, with no business experience, into producers of the Disneyland Dream. Vans storytelling prowess evolved into the timeless training programs and educational materials of the Disney University, capturing the hearts and minds of millions. Vans audience was initially Disneyland employees; the many thousands of cast members who have helped create The Happiest Place on Earth for nearly 60 years.

One of Vans storytelling strategies involved creating a whole new language at Disneyland; a language that painted a very clear picture of how employees would evolve into actors. Disneyland is a huge stage, a show in and of itself, and Van leveraged this by introducing show-business terms. He reasoned that a new vocabulary, coupled with strong organizational values, could help bring pride and energy to very demanding jobs. Plus, it wasnt limited to employees of the park; Van also changed the words used for customers. Thus, employees became hosts, hostesses, and cast members. Customers became guests, and crowd-control became guest control. This combination of a unique vocabulary and memorable training programs, supported by Walts unwavering focus on quality, set the stage for decades of unparalleled success. Van Frances lessons now form the basis of the renowned Disney-style of service at every Disney theme park and resort in the world.

Telling the story of Van France was a two year journey for me, culminating in my recent book, Disney U: How Disney University Develops the Worlds Most Loyal, Engaged and Customer-Centric Employees. While writing Disney U, I would occasionally struggle with word choice and writing style: How to best share the creative brilliance of Van and the founding members of the Disney University? How could I capture readers hearts and minds? During those moments, I simply remembered a fundamental skill Van taught me  tell a story.

Setting the tone for each of the 13 chapters in Disney U are never-before-told stories from numerous Disney legends. These pioneers share behind-the-scenes success stories of how they helped bring Walt Disneys and Van Frances dreams to life.

Storytellers ignite passion, foster creativity and help us explore possibilities. How are you using the power of storytelling with your employees, colleagues or customers?

A Note about Mary Poppins and the Contributor of Disney U Foreword: Jim Cora, the retired chairman of Disneyland International, worked directly for Walt and started the Disney University with Van France. While preparing for a presentation we recently gave at The Walt Disney Family Museum, Jim recounted a fun story. Early in his 43-year career with Disney, Jim had the opportunity to work a plum assignment; he oversaw parking operations for the 1964 Hollywood premier of one of the most famous Disney all movies:  Mary Poppins. 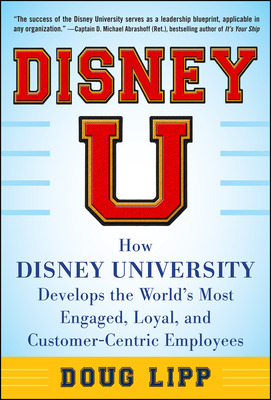