Excerpt from a speech given by Joel Gurin, author of Open Data Now.

So what is Open Data?  There are a number of different very good definitions, but my working definition is that it’s accessible public data that people, companies, and organizations can use to launch new ventures, analyze patterns and trends, make data-driven decisions, and solve complex problems. Sound like Big Data?  It’s not Big Data; it’s very different from Big Data.

Some of the classic examples of Big Data are things like national security data, data that retailers collect about their customers, or data that banks keep on credit card holders.  It’s the model of “data is power” and if you own the data, you own the power.  A lot of Big Data is also Open Data, but a lot of Big Data, especially in the business context, is data that somebody owns and they rule by owning it.

Open Data in many ways is the exact opposite.  Open Data is a democratic and a democratizing idea that is business savvy at the same time.  The basic idea of Open Data is not to benefit the people who hold the data but to set it free in a way that can benefit the public.  I think of it as data with a public purpose; I think of it as data with a mission. The mission can be to promote government accountability, help start new businesses, accelerate scientific research, or do many other things that are part of the public good.

The part that I have focused on in the book is the business value of this incredible resource. Many of you know that McKinsey & Company has now estimated the annual value of Open Data worldwide at something like three trillion dollars, or, somebody from McKinsey said the other day, 3.2 to 5.4 trillion dollars. Whether you believe those exact numbers or not, it almost doesn’t matter.  The point is it’s being recognized as something that has tremendous economic value as well as social value.

How do we realize the value of Open Data, and what’s necessary to do that?  The DATA Act is part of that because transparency and accountability are core. But another critical part is the Open Data Policy that President Obama announced last May, which is geared to making all federal data open by default, meaning that unless there is a security or privacy or confidentiality reason not to make it open, it’s open.  In principle this is absolutely the right thing to do. But it is not a snap-your-fingers-and-it’s-done proposition.  I’ve just published a piece today [January 22, 2014] in Information Week on six things government ought to do to make Open Data work, including passing the DATA Act and implementing the Open Data Policy. But implementing the Open Data Policy is not a slam-dunk.

Think about it: There are something like 10,000 federal information systems.  The comparison that people use is that last scene of Raiders of the Lost Ark, where there’s stuff in there somewhere in that warehouse that’s worth something, but good luck finding it. Thats certainly not true of all federal data systems but it’s true of too many of them.  So turning this all into Open Data is not going to happen overnight.  We have to set priorities.  We have to figure out how to get the data users  businesses, advocates, or others in government itself – connected with the data holders in the agencies so we can implement the Open Data Policy in a way that’s durable and can have an impact. Assuming we can do that, the potential is huge.

It’s significant that when the president announced the Open Data Policy last May, he chose a tech center in Austin, Texas to make this announcement.  He went to a place that was at the center of technology and business development. And he said that Open Data is going to help launch more startups.  It’s going to help launch more businesses.  It’s going to help more entrepreneurs come up with products and services that we haven’t even imagined yet.”  This is very possible;  it’s already been true in the past.

You can read the full transcript and blog article here.

From 2011 to 2012 Joel Gurin served as chair of the White House Task Force on Smart Disclosure using Open Data to help consumers make informed choices on healthcare financial services education and energy. An award-winning science journalist he is currently Senior Advisor at the GovLab at New York University. Gurin is the former editorial director and executive vice president of Consumer Reports and the former chief of the consumer bureau of the Federal Communications Commission. From 2011 to 2012 Joel Gurin served as chair of the White House Task Force on Smart Disclosure using Open Data to help consumers make informed choices on healthcare financial services education and energy. An award-winning science journalist, he is currently Senior Advisor at the GovLab at New York University. Gurin is the former editorial director and executive vice president of Consumer Reports and the former chief of the consumer bureau of the Federal Communications Commission. 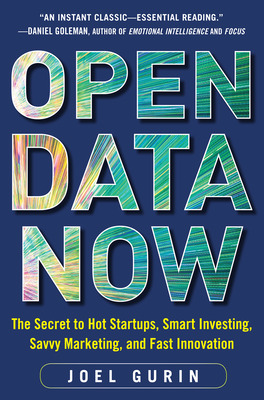