The New IT - BusinessBlog : McGraw-Hill
Skip to content
Home
/
The New IT

Excerpt from The New IT: How Technology Leaders are Enabling Business Strategy in the Digital Age by Jill Dyché.

Excerpt from Chapter 1: The Problem with IT

Forging a New IT Identity
The new IT organization is hardly the result of a revolution. Its more like a picnic where everyone brings his or her own favorite dish to the table, often blissfully unaware of whats already being served. The result is often many salads and desserts and a dearth of main courses. Guests leave craving something more substantial. After all, you can only eat so much potato salad. Thats a metaphor for the usual tactic of replacing systems and platforms with something no one really has an issue with, but that likewise doesnt really satisfy anyone.

The lack of IT executives influence is certainly part of the problem. CIOs, struggling with shifting reporting structures and fighting for a seat at the executive table, are undergoing nothing less than an identity crisis. As CEOs and CFOs continue to measure IT on the trendiness of their smart devices, email uptime, and office applicationsconstantly scrutinizing IT costs, system availability, and help desk response timeCIOs desperately try to reform their reputations.

A 2013 CIO survey found that 63 percent of the IT executives interviewed were meeting more frequently with influential stakeholders in order to increase their organizational profiles and shift their focus to more pressing strategic concerns. The same survey found that only 39 percent of CIOs reported to the CEO, with the rest reporting to CFOs, COOs, or other departments.

The truth is that kickoffs and cold cuts only go so far. Leaders must take a deliberate and honest look at where theyre going in order to induce change. Before you can really know where youre going, you need to know where you are and whats driving the need for change.

The first step is to pinpoint the current challenges IT faces in the age of the cloud, big data, decaying legacy systems, and digital everything. Figure out what the ideal state looks like. Then plan what IT assets will help bolster the brands of both the IT organization and the company at large. And, finally, start steering delivery. This graphic illustrates the steps for creating a new IT identity.

Indeed, in order to successfully rebrand their organizations and redefine their own roles, IT leaders should consider three new decision levers that will drive change: operation, connection, and innovation. Jill Dyché is the Vice President of Best Practices for SAS. She is also an acknowledged speaker, author, and blogger. Previously, Jill was a partner and co-founder of Baseline Consulting. She has written three books on the business value of IT, including the bestselling The CRM Handbook. 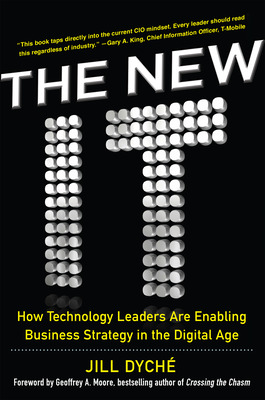