Excerpt from An Epidemic of Empathy in Healthcare: How to Deliver Compassionate, Connected Patient Care that Creates a Competitive Advantage, by Dr. Thomas Lee.

Sociologists have hypothesized that we are hardwired for empathy, probably because it is essential to the survival of our species.

It drives us to care for infants and help others through rough patches. Households, businesses, and military units function better when their members have empathy for one another. Like two other essentials for survivalfood and sexempathy makes us feel good.

Neuroscience gives support to that theory. A series of experiments in the last decade has identified neurons in the inferior frontal and posterior parietal regions of the human brain that are active both when one is performing a task and when one is watching another person performing that task. Functional magnetic resonance imaging (fMRI) scans have shown that the same regions of the brain dubbed the mirror neuron systemare active in people relaying an experience and those who are merely hearing about it. Mirror neurons may be at work when a mothers smile elicits a smile in her baby or when an outbreak of yawning erupts in a staff meeting.

A few years ago researchers took on the work of determining how contagious yawning originates and spreads. In one experiment, people yawned while undergoing fMRI scans and researchers noted their brain activity. When a second group of people was shown images of yawning people while being scanned, not only did the same regions of their brains light up, but the subjects yawned in response.

Although babies haven’t been subjected to fMRI scans to test their mirror neuron activity, behavioral studies have determined that they begin to develop empathy early in infancy. Emotional contagion comes first. That is why babies seem to smile back at grinning adults. There is also evidence that infants begin to express cognitive empathyattempting to comfort siblings who are crying even before their first birthdays.

My colleague from Harvard Medical School Helen Riess, MD, has described how physiologic changes detectable through advanced imaging technologies demonstrate real resonance between patients and empathic clinicians. The very regions of the brain that are activated in suffering patients are active in the physicians who care for them, although less intensely. This milder version of experiencing another persons pain may enable the observer to understand a persons distress without being overwhelmed by it.

Other research has shown that heart rate and skin conductance change when empathic relationships are at work.

The bottom line from these various researchers is that empathy is real; it is based in based in neurobiology and is not a reflection of how good a person one is. 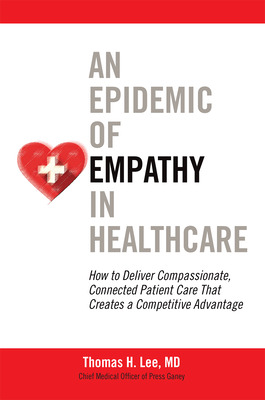