Excerpt from THE ALIBIBA WAY  by Dr. Ying Lowrey.

Alibaba’s great innovation was to base its own growth and development on the unleashed entrepreneurship of grassroots enterprises.

Previously in China, an individuals creativity, capabilities, and ambitions were inhibited by social institutions that did not guarantee the rights of free enterprise and by a government that did not protect individuals creative ability to start companies. When we now champion grassroots entrepreneurship, we include not only individuals among the public at large but also primary-level communities and primary-level government organizations.

By adhering to the concept of customer first and the motto, Make it easy to do business anywhere, Alibaba has used the dynamism that has been gestating within the public at large to create one astonishing feat after another.

The company set its sights on being in business for 102 years and being Chinas greatest and most unusual major company to span three centuries.

To achieve this, it had to institute a sustained and routinized form of Innovation.20 The value concept of customer first is not built on the basis of altruism. Instead, it is determined by the ecosystem needs of the platform economy of e-commerce in the digital age.

This value concept and its positioning require unusual comprehension and long-term vision. The concept of customer first enabled Alibaba to build a platform based on the digital age. Highly effective hardware and software enabled it to develop a massive customer base, both of which then enabled Alibaba to employ the scale effect of technological innovations. All this counted toward what the company did itself and so was only one side of the story. On the other side, Alibaba bestowed enormous capabilities on grassroots entrepreneurs, which allowed them to unleash their own entrepreneurship. In this process, Alibaba and millions of small companies formed a digital-age mutual interdependency that allowed the stars and the moon to reflect light off one another.

There are 7 million extremely active merchants on Alibaba. Not only have they created their own business turf, from which a large number of outstanding enterprises have emerged, but in the process they have catapulted the growth of Alibaba.

Jack Ma is the chairman of the board of the Alibaba Group. In 2009, on the tenth anniversary of the company’s founding, he described the secret of the companys success: We have been willing to do what others were not willing to do but also what they could not do. Over this past decade, we have written our script solely for micro and small enterprises, that is, for the forsaken daughters that no-one else wanted.

Orders and cash flow are the lifelines of companies. Through Alibaba’s e-commerce platform, by participating in the formation of a sturdy supply chain, micro and small enterprises have discovered a way to exist and to grow in a manner that represents a completely new path. By now, the Alibaba Group has entered the ranks of global Internet giants. The real power behind it, however, lies in the tens of millions of astonishingly dynamic small Chinese companies. Alibaba’s mission is to create a situation that makes it easy to do business anywhere.

Before making any decision, Alibaba first takes into consideration how any action may contribute to increasing benefits to its customers, by allowing them to make more money, save on costs, or manage employees better.

Dr. Ying Lowrey is an Economics Professor at the School of Social Sciences Tsinghua University and Deputy Director of Tsinghua Research Center for Chinese Entrepreneurs. Previously she was senior economist at the US Small Business Administration and professor of economics at several US universities.

Dr. Ying Lowrey is an Economics Professor at the School of Social Sciences Tsinghua University and Deputy Director of Tsinghua Research Center for Chinese Entrepreneurs. Previously she was senior economist at the US Small Business Administration and professor of economics at several US universities. 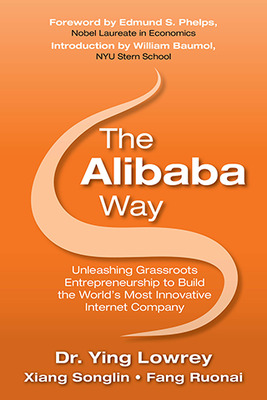