Excerpt from Emotional Vampires at Work, by Dr. Albert Bernstein.

Vampires stalk you even as we speak. Theyre in the next cube, down the hall, or upstairs, in the corner office. Its not your blood they drain; its your emotional energy. Were not talking about everyday annoyances here: the surly, clueless, and unmotivated folks you learned about in the Handling Difficult People workshop. These are authentic creatures of darkness. They have the power not only to aggravate you but also to cloud minds with false promises and to hypnotize everyone into believing they are the best person for the job, whatever that job might be. They draw people in, then drain them, leaving everyone burned out and exhausted, yet lying awake at night wondering: Is it them, or is it me?

The organizational world is full of emotional vampires, even at the very top. Their ability to change shape and cloud minds allows them to thrive in cultures where what something looks like is more important than what it is. In fact, as we shall see, it was emotional vampires who created these cultures.

No matter where you work, you cannot escape them. How you handle the emotional vampires in your organization will have a profound effect on the course of your career and the quality of your life.

So, who are these predatory, mind-clouding, shape-shifting creatures of darkness who wield such power in businesses, nonprofits, the military, and politics?

Actually, they are people with a particular kind of psychological disability.

At the turn of the twenty-first century, I first used the term emotional vampires to describe people with personality disorders. The melodramatic metaphor is merely clinical psychology dressed up in a Halloween costume,but it does fit. Vampires are dangerous predators who are evaporated by sunlight, but aside from that, they are much more exciting and attractive than other people. These days, everybody wants to be a vampire, date a vampire, or at least read books and watch movies about them. The same is true of people with personality disorders. They may be immature and dangerous, but we fall in love with them, elect them to office, hire them to run major corporations, and watch them on reality TV.

People with personality disorders, like vampires, are, first and foremost, different. They seem so much better than regular people, but often they act much worse. Vampires certainly do things that hurt other people, but thats not what makes them so dangerous and draining. It is our own expectations that, over time, cause the most harm. If we assume that they think and act in the same way we do, we will usually underestimate the risk, thinking that surely this time they will listen to reason. They wont, and they will get us every time. Knowledge is the only protection. To keep from being drained, we must know that emotional vampires are different, and understand exactly what those differences are.

In graduate school, I learned this simple distinction: When people are driving themselves crazy, they have neuroses or psychoses. When they drive other people crazy, they have personality disorders.

Emotional vampires are people you probably will find at work. They are not psychopaths, but still they are dangerous enough to cause plenty of trouble if you dont recognize them as playing by a different set of rules than you do.

The most useful way to understand people with personality disorders is to recognize the hunger that motivates them. Each of the Vampire types are driven by a particular immature and impossible need that, to them, is the most important thing in the world. Their singular drive is the secret of their successand of their failure. There may be some consolation in knowing that though emotional vampires may be successful in some areas, they are generally not very happy. There is never enough of what they need to satisfy them. In the end, they often self-destruct, but the process can cause a tremendous amount of collateral damage.

Emotional vampires themselves are not necessarily aware of the irrational needs that animate them. Like young children, they dont do much self-examination; they just go after what they want. This is the area of vulnerability you must exploit. If you know the need, you know the vampire.

If you know what to expect, then you can defend yourself.

Albert J. Bernstein, Ph.D., is a clinical psychologist, bestselling author, and nationally recognized expert in conflict resolution. His work on psychological issues in the workplace has been featured in Men's Health, Seventeen, Cosmopolitan, Real Simple, Parents, Best Life, and other publications. 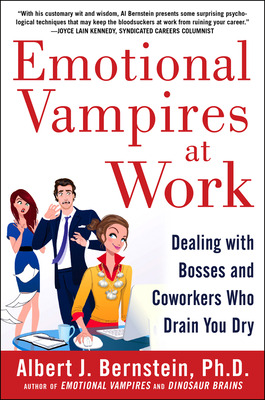