Guest post by Bill Capodagli and Lynn Jackson, authors of The Disney Way.

I dream, I test my dreams against my beliefs, I dare to take risks, and I execute my vision to make those dreams come true.

Dream, Believe, Dare, Do: These words reverberate across the decades of Disney achievement. Everything Walt didevery choice he made, every strategy he pursuedevolved from these four principles. And as the bedrock upon which his life and work rested, they naturally informed the basic values that dictated how he ran his Company.

The Walt Disney Company continues to achieve year after year, decade after decade, for affirmation of Walts way.

A dream is a wish your heart makes.  Jiminy Cricket

It is no easy matter to convey a dream. Dreams, by nature, are deeply personal experiences. But true to his imaginative genius, Walt Disney was able to transform his dreams into stories that effectively articulated his vision to others. More importantly, the stories served to draw others into his fantasies, thereby marshaling the power of their collective creativity for the benefit of his dream. It doesnt matter if you are writing the next Disney song, developing a line of cosmetics, or preparing to open a new long-term-care center. A story must be told in a fresh and engaging way. And, like Disney, everyone in the organization must tell it over and over again.

When you believe in a thing, believe it all the way, implicitly and unquestionable. Walt Disney

From those early years growing up in a rural environment, Disney formed beliefs and values that stuck with him throughout his life and from which he never deviated.

Perfectly complementing Walts firmly held beliefs was the philosophy expressed by his brother, Roy: When values are clear, decisions are easy. Together, these precepts formed what is, in effect, The Walt Disney Companys mantra: Live your beliefsor what we simply call Believe.

When youre curious, you find lots of things to do. One thing it takes to accomplish something is courage. Walt Disney

Premier players can be found in all corners of the business world, and one thing they have in common is a willingness to take bold risks. Walt Disney was such a player.

In fact, if there was a cornerstone upon which The Walt Disney Company rested, it would have to be inscribed with one short word: Dare. Throughout the 43 years that Walt ran the Company, he dared to meet challenges, he dared to take risks, and ultimately, he dared to excel.

When we consider a project, we really study itnot just the surface idea, but everything about itand we work hard to do the best possible job. Walt Disney

Vision without a means of execution is like a plane without wings or Dumbo without his earsit just wont fly. No matter how deep an organizations resources are, the progress of their projects greatly depends on the strength of execution, and proper execution requires thorough and detailed planning, a reality that Walt Disney understood completely.

But, Walt realized it took more than dreams, believing in values, taking risk and making plans to be successful; the real pixie dust was LOVE. Love is just not a topic that is typically discussed in the boardroom. Yet, love is present in nearly every aspect of our lives. And Walt Disney knew it.  He exemplified not only love for his product but also for his Cast, his Guests and for himself.

The way to get started is to quit talking and get started.   Walt Disney

It is little wonder why so many cultural initiatives fail. Many show a lack of passion, lack of understanding of what it takes to make serious improvements in customer service, and a lack of commitment to the long-term. Becoming customer-centric is not an activity to be checked off during an annual strategic planning process. Instead, top management must drive an organization-wide customer-centric culture initiative, while also inspiring their frontline leaders to take ownership in its development and results.

Ottawa County, Michigan has transformed their culture through a comprehensive adoption of The Disney Way principles. Al Vanderberg, Ottawa County Michigan Administrator, stated, The results have been nothing short of amazing as preconceived notions of limitations of the applicability of customer service to local government services have been shattered!” Follow a detailed roadmap for change and let Al and his wonderfully talented and dedicated workforce inspire your own “Dream” of a customer-centric culture!

Bill Capodagli, Managing Partner of Capodagli Jackson Consulting, brings managerial experience at several top consulting firms and graduate-level teaching experience to the firm. He is a popular speaker at both national and international conferences where he teaches audiences to implement the Disney business model.
Lynn Jackson Bill’s partner in Capodagli Jackson Consulting has an extensive background in organizational development and has successfully implemented the Disney principles in numerous organizations.

Lynn Jackson is a co-founder of Capodagli Jackson Consulting and has been helping leaders and teams to embrace the principles of Disney and Pixar for over 20 years. She holds an M.S. degree in organizational development and instructional systems technology, and develops workshops based upon Walt Disney’s Dream, Believe, Dare, Do principles. 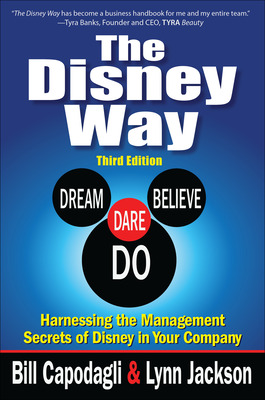