Adapted from Communicate to Influence: How to Inspire Your Audience to Action, by Ben Decker and Kelly Decker.

An analogy is a comparison that reveals an underlying (and surprising) commonality between two dissimilar objects or ideas. Analogies use familiar examples to explain ideas and concepts that are less easily understood. They are concrete and matter of fact. Analogies help people get it.

Cognitive researcher Douglas R. Hofstadter goes so far as to say that analogy is the core of cognition. Cognition is our human ability to process information, solve problems, and make decisions, and it has a lot to do with our ability to grasp analogiesour ability to recognize familiar patterns in unfamiliar concepts. The ability to understand analogies enables us to sort ideas and information into categories so that we can better understand reality. (You might remember this from taking or helping your children prep for the SAT.)

The ability to perceive analogies has increased our understanding of the world. Isaac Newton is said to have watched an apple fall from a tree and recognized an analogy to a planet falling in orbit around the sun because of the pull of gravity. Frederick Kekule dreamed of a snake swallowing its own tail and awoke with the realization that the circled snake was an analogy for the ring of carbon atoms in a benzene molecule. James Watson was walking down a spiral staircase at Oxford when he realized in a flash of intuition that the spiral staircase was an analogy for the double-helix structure of the DNA molecule.

A striking analogy can be a great way to kick off a presentation and hook your audience. A Silicon Valley technical engineer who went through one of our programs was preparing to speak to his management team about the need for a new set of technical standards in the company  not exactly an initiative that would be at the top of the team members list. He needed them to get it instantly, and to care so much that they would shift resources to make this possible.

His initial plan was to dive right into bits and bytes. Instead, he opened with an analogy that immediately hooked the attention of his audience.

The Great Baltimore Fire of 1904, he said, leveled most of central Baltimore. It burned for two days, destroyed 1,500 buildings, and put 35,000 people out of work. It was a tragedy that could have been avoided. Firefighters were on hand from the neighboring communities of Washington, DC, Philadelphia, New York, and Atlantic City but when they went to connect their fire hoses to the hydrants in the center of Baltimore, they couldnt. Their hoses didnt fit. Every city had a different type of hydrant, and those firemen had to stand by and watch the city burn because their hoses couldnt fit. Like Baltimore in 1904, our organization will suffer if we dont standardize our technical equipment and processes.

Of the thousands of talks we have seen every year, that analogy has stuck with us. It seemed as if everyone in the room had an aha! moment when they grasped the parallel between nonstandardized fire-hose couplings and nonstandardized technical specs in their own industry.

Analogies have a way of turning a light on in our mindsand in this case, gaining the attention of management. Ben Decker is CEO of Decker Communications Inc. and regularly keynotes on the importance of developing executive presence and effective communication for leaders. 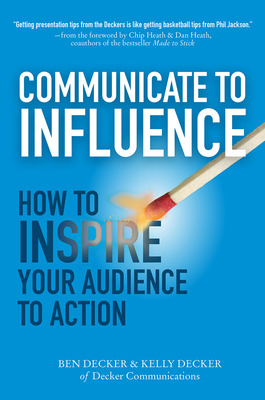