Excerpt from  SECOND SHIFT: The Inside Story of the Keep GM Movement by David Hollister, Ray Tadgerson, David Closs and Tomas Holt.

(Or you can watch the trailer for the companion PBS documentary, also entitled Second Shift: http://www.secondshiftfilm.com/)

The problem: Saving the Lansing, Michigan, region from a doomsday scenario, where the major manufacturer in the region (General Motors) would be closing its plants and leaving town.  The proposed new storyline: Characterized by hope and prosperity, the major manufacturer, GM, would make a major investment in multiple new state-of-the-art manufacturing plants in the region. The potential outcomes:  Drastically different, i.e. no cars being produced in Lansing and thousands of people losing their jobs, or producing the largest number of automobiles in the world with a best-in-class workforce.

Lansing is the capital of the State of Michigan with a population of 10 million people. The  context of this story is the capital city of a midwestern state bordering four of the Great Lakes. The landmass of the state contains more than 11,000 inland lakes. The area is spread across the Lower Peninsula, also warmly referred to as the Mitten because of its shape (with the Mideastern region of the state identified as the Thumb), and the Upper Peninsula, affectionately referred to as the UP. The Mackinac Bridge, a suspension bridge, connects the Mitten and the UP. The symbolism in this description of Michigan has strong and resonating meaning in how Lansing was able to move from a doomsday scenario to an outlook of prosperity. Mayor David Hollister and his right-hand person, Ray Tadgerson, created a dynamic, fluid infrastructure that developed bridges to all corners of the community.

But the story was not simply one of an economic development challenge; it was about getting a fractionalized, internally competitive region to work together and about reshaping the communitys understanding of GM and its importance to the community. The blueprint for the civic collaboration that ensued became known as the Second Shift Model, and the strategically focused campaign theme was communally referred to as Lansing Works! Keep GM! The Second Shift Model provided both the infrastructure and road map for the greater Lansing community to stay unified and focused on the mission of Lansing Works! Keep GM! Out of necessity, the six-dimensional framework was constructed to solve complex community problems involving multiple stakeholders with oftentimes multiple goals. Some would see the outcome of such an approach as being on the same page, having the same vision, or driving toward the same goal.

Practically, though, the Lansing community needed a solution to the looming doomsday scenario. The Second Shift Model became it, a model that is theoretically robust, practically relevant, and dynamically flexible enough to be an applicable solution to complex community obstacles and challenges involving multiple stakeholders with multiple competing goals in communities across the country and the world.

While the core dimensions of the Second Shift Model are not necessarily unique per se, they do provide an integrated and elaborate direction and structure for organizing a project with complex political and economic considerations. The six-dimensional framework that makes up the Second Shift Model includes identifying, partnering, building, solving, celebrating, and persevering.

David Hollister is the former mayor of Lansing Michigan (1993–2003) and currently the Director of the Michigan Department of Labor and Economic Growth.

Ray Tadgerson is the former President and CEO of C2AE and served as the senior strategic and marketing advisor to Mayor David Hollister. Tomas Hult is Professor Byington Endowed Chair and Director of the International Business Center in the Eli Broad College of Business at Michigan State University and one of the world’s leading authorities on strategic management global supply chains and complex multinational corporations.

David Closs is Professor McConnell Endowed Chair and Chairperson of the Department of Supply Chain Management in the Eli Broad College of Business at Michigan State University and serves as a Senior Advisor to Michigan’s Governor on the Commission for Logistics and Supply Chain Collaboration. 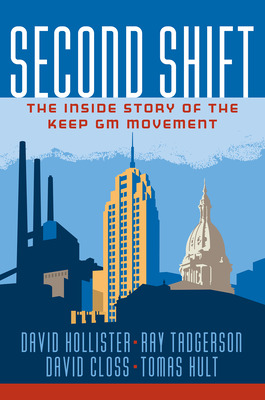