Adapted from It’s About Patient Care by C. Martin Harris and Gene Lazuta.

The physician champion is a professional personification of the like attracts like idea that says that human beings tend to be attracted to other people who are like themselves.

It is by no means a law of nature, but it is a common enough notion, and it makes a certain amount of sense. We gravitate because we are comfortable with the familiar, and we find shared experiences and interests to be good foundational material with which to build relationships.

So when we discovered that there were physicians who took to the EHR (electronic health record) particularly well, who attended the classroom training we provided and then availed themselves of the on- site training support we made available during the first week of a departmental go- live, and who then proceeded to use the technology in ways that, in fact, made their practices work better, we, at first, very politely asked them how they had done it. And then, even more politely, we asked if they wouldnt mind telling their colleagues how they could do it, too. To our surprise and delight, many did, establishing a direct physician connection between the technology and the group practice and changing the entire dynamic of the conversation and program.

Suddenly, it became a really positive time. After the initial logistical nightmare of planning and then executing an implementation, system testing, end- user training, go- live, follow- up, and troubleshooting initiative of this size, complexity, and interpersonal magnitude, and especially after we discovered that there were sincere and enthusiastic clinicians who embraced our new technology tools not because of our persuasive efforts, but because they actually delivered the kind of value we had long believed they would, success felt really good.

We took a lot of before and after pictures of physicians offices, first stacked with charts and cluttered with paper, and then clean and tidy once the EHR did its work. We must have used a thousand different variations of the quote, I didnt think I would like it, but now that Im using it, I dont know how I ever got along without it, that we heard so often from our doctors and nurses that, after a while, it became a bit of a cliché. We even made life- sized color cutouts of real MyChart patients holding a sign that said, Im an eCleveland Clinic MyChart Patient. Are you? that we stood up in the lobbies of our Family Health Centers to promote the availability of the new service.

Most important, we were able to finally begin answering the If its just like a paper chart, why should I bother using it? question that was among the first we encountered at the outset of the project.

We answered that question by pointing out that the data captured in the electronic health record was now accessible to any clinician who needed it, anytime, anywhere there was a computer connected to the Internet. And how, after only a couple of years, our master patient index already contained the records of millions of patients, many of whom were signing up for MyChart as a way of staying connected to the activities related to their care and to their Cleveland Clinic providers of choice.

We initiated DrConnect, a service through which physicians who referred their patients to Cleveland Clinic for specialty care could see the material documented by the treating physicians through a secure online portal. Once patients answered yes to the question, Would you like your physician at home to have access to the medical record your doctors create about you while youre here? their referring physicians received an e- mail asking them to log into their DrConnect account to view the secure information it contained. At a stroke, communicating with the physicians who entrusted their patients to our specialists was liberated from the whims of the U.S. maildelivered discharge notice; and every referring physician who signed up for the service became one of our virtual clinician partners.

None of which would have been possible without our newly branded MyPractice EHR.

C. Martin Harris MD is Chief Information Officer and Chairman of the Information Technology Division of Cleveland Clinic where he is a staff member in the Department of General Internal Medicine. 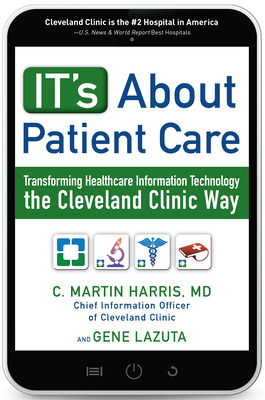