Guest post by Rhett Power, author of The Entrepreneur’s Book of Actions.

Apple didn’t invent the PC, MP3 player, smartphone or tablet. They took existing concepts and used a different approach or added polish to make them desirable. With the iPad, for example, Apple joined Microsoft and other companies dabbling in the tablet market. Cutting down hardware for desktop software was never successful. Finally, Apple conceived making the tablet as a larger, more powerful smartphone, enhancing existing technology.

So if marketing is Apple’s unique contribution, what can we learn from Apple’s marketing? Here are six areas to consider:

Although Apple’s most important contribution isn’t what they build as much as it is what they communicate around what they build, product is still important. You don’t need to invent something totally new. You can take existing technology and visualize it differently, put it into a new package. Make certain that everything works smoothly and looks great so users are proud to own the product and enjoy using it.

Create a clear sense of mission and communicate it to anyone who works for the company. Steve Jobs decided early on “that the company’s mission was to change the way people interacted with technology…” he wanted “to make technology so easy to use that it would become a prominent player in the way we, as humans, interact with each other.” A clear sense of mission allows clear purpose and direction within the company and clear communication to the world outside.

Keep it simple and meaningful. Apple tells people that they stand for something, and they stick by those principles in action. The idea of “enriching lives” is big for Apple along with interactivity. Employees carry a credo card to remind them of how important these principles are. Play rooms for customers’ kids, the Genius Bar, salespeople not working for commission so they can better focus on the customer, are all part of that credo. From top to bottom, the business tells its story, clearly and simply.

Apple’s well-told story, like any good story, involves drama. In addition to simplicity and clarity, Apple includes villains in its tale, first IBM, then Microsoft, then Google and its Android operating system, with Apple “the only hope” and “the only force that can ensure…freedom.” It’s a story that keeps secrets and builds mystery, and it plays on emotions. Apple’s marketing “hit their consumers where they really live — not in the pocketbook…but in their hearts.”

When you can go with a visual instead of words, choose the visual. Like the verbiage, keep the images simple. Consider Apple’s well-known logo, a simple shape of an apple with a missing chunk. If you saw a picture of a real apple, just a couple of well thought-out words would probably connect you very quickly to the world of Apple technology, not a natural link had Apple not made it so.

Apple users form an enthusiastic community, from top executives to employees to customers. Common words that refer to this community are “evangelists,” a “cult,” or a “tribe.” All imply a group of people engaged with the products in such a way that they are happy users and promoters. They interact with others in the community seamlessly and persuade others to join the community. Apple users are happy to review products, and Apple leverages these reviews.

Apple provides a well-integrated experience for its customers, from the way employees receive and interact with them in a shop, to the product packaging, to the seamless connection between products, to the way members of the community connect with each other. Apple’s mission speaks for itself at every level of the experience.

So…a great product, a clear mission, a good story told simply, briefly and with drama, touching the emotions, simple, thoughtful visuals, an enthusiastic community and a seamless user experience — easy, right? But as Winston Churchill once said, “If I had more time I would have written you a shorter letter.” Simplicity and brevity are hard work. They take time. But they are well worth the effort.

This article was originally published on Inc.com by Rhett Power.

Rhett Power is co-founder of Wild Creations, an award-winning start-up toy company named one of Inc. Magazine’s Fastest Growing US Companies. A member of the United States Department of State’s International Speakers Program, he travels the globe speaking about entrepreneurship, leadership, and management alongside the likes of Gates Foundation CEO Sue Desmond-Hellmann, AOL Founder Steve Case, and President Barack Obama.

Rhett co-founded Wild Creations in 2007 and quickly built the startup into one of the fastest growing companies in the US. He has been a finalist for Ernst and Young’s Entrepreneur of the Year twice. Rhett recently was named one of the world’s top 100 business bloggers for 2016 and is a regular contributor on management and leadership to Inc., Forbes, Success Magazine and CNBC. His new book The Entrepreneurs Book of Actions is in book stores now. 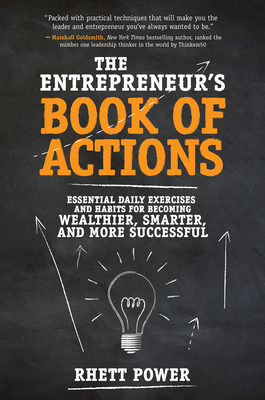