Excerpt from  Personality at Work: The Drivers and Derailers of Leadership, by Ronald Warren.

Steve Wozniak and Steve Jobs spent almost 10 years in garages working together and tinkering with and mastering electronics projects.

What drove them was their shared Grit—a blend of Conscientiousness, Achievement Drive, and Innovation—the behavioral drivers that focused their IQ and intellectual curiosity and was the common denominator on which their relationship and Apple Computer were built.

Except for Grit, Woz and Jobs differed in almost every other aspect of personality, which made their overall personalities strikingly different:

These personality traits, not his Grit, were why Jobs saw a binary world. Jobs was so self-centered and self-absorbed that he was less capable and less willing to collaborate with others.  Empathy is rare enough in dominating personalities, but Jobs was also hostile—mean, nasty, and ungracious with others—the exact opposite of behaviors that constitute key aspects of social and emotional intelligence.

Woz aspired to be a great engineer, not a great leader. Woz channeled 100 percent of his Grit into the engineering; he wanted to be on a team, not lead a team. Woz’s ambitions were all about building technology, not building power or authority or status as a company leader. He earnestly believed that formal authority clashed with his introverted, easygoing, generous, and accommodating nature. Woz was raised to be suspicious of the company man and to understand how power corrupts.

Woz recognized Jobs’s talent for promoting, networking, marketing, and funding—the exact roles and situations where Woz was most uncomfortable and that he wanted to avoid. Precisely because Woz was accommodating and just wanted to do great work, he was a perfect complement to the stubborn visionary, the controlling and competitive natural showman, Steve Jobs. Woz’s deferential personality, shyness, and introversion all led him to consciously opt out of leadership at Apple where Steve Jobs was all in.

Aside from the traits of Grit, Dominance, and Deference, there is one other important behavioral dimension and leadership asset in which neither Woz nor Jobs excelled: EQ and social intelligence. Neither had the social and emotional intelligence needed to effectively manage himself and interpersonal relationships or to attain high-performance leadership— though for dramatically different reasons.

Jobs was too dominating and Woz too deferring. Jobs’s bossy, authoritarian style suffocated teamwork and communications and eroded morale. Woz’s shy, unassertive, conflict-avoidant personality impaired his ability to speak up, address conflict constructively, and fill a team leadership–versus–follower role. When Jobs mistreated others, Woz might feel awful about it, but he would not intervene, behave like a leader, and stop it. Though Jobs’s behavior conflicted with Woz’s personal values (and for that he felt bad), Woz did not act on his values to help shape and define the culture.

Jobs seized the lead, Woz colluded-by-accommodation, and the behavioral fabric of an Apple culture was woven: in the behaviors demonstrated and tolerated by leadership. Woz left Apple with a reputation as being well liked, and in fact revered, and as being respectful and considerate of others. While Woz never aspired to lead, he might have developed stronger team leadership skills had he not become wealthy and free to do what he wanted. He moved on to his other passion projects and away from the unhappy corporate culture at Apple. Unlike most professionals, Woz could afford the luxury of choices that many professionals do not have if their career choices include management or leadership roles.

Grit and EQ are behaviors that appeared later in human evolution (species phylogeny) and in individual development (personal ontogeny), and in many people, these behaviors only emerge well into adulthood— if ever. Yet we see basic dominance and deference behaviors emerge in toddlers. For some, the more highly evolved behaviors of Grit and EQ require the full maturation of the frontal cortex—in the mid-twenties.

Ronald A. Warren, Ph.D., developed the LMAP 360 assessment used by top education institutions, corporations, and healthcare systems worldwide. Ron has worked in clinical and organizational psychology and has been published in American Journal of Psychiatry, Adolescence, and Measures of Leadership.

Ronald A. Warren, Ph.D., developed the LMAP 360 assessment used by top education institutions, corporations, and healthcare systems worldwide. Ron has worked in clinical and organizational psychology and has been published in American Journal of Psychiatry, Adolescence, and Measures of Leadership. 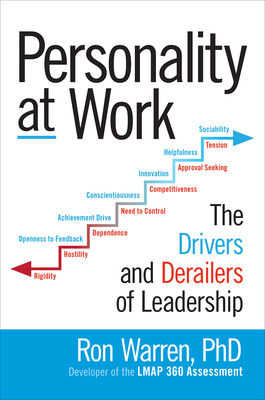