Management expert Anne Marie Knott explains why misguided theories on how innovation works stagnates productivity growth in businesses and in the economy.

Everyone knows innovation is hugely important—not just for companies, but for the economy as well. That’s why US companies invested $355 billion last year, while the government invested another $113 billion. What people haven’t known is that the productivity of the company investments has declined 65% over the last 40 years. That’s why economic growth is stagnant.

How Could Productivity Fall this Much?

The simple answer is that no one has had a good way to measure R&D productivity until recently. The lack of measures wasn’t a problem several decades ago, when R&D was viewed as the driver of company growth. In those days, companies relied on the intuition of visionary scientists and engineers to ensure they continually generated technologies to open new doors.  We see that same sort of intuition today in companies like Amazon, Apple under Steve Jobs, and Microsoft under Bill Gates.

The problem with lack of metrics arose with the emergence of financial management. Under financial management, all activities had to demonstrate their contribution to market value. What happens when companies have to manage by numbers an activity they formally directed by intuition, is that they lose their footing. Think of it in terms of walking with a cup of coffee. You learn that the only way to do it without spilling is to not look at the coffee. As soon as you use the coffee to guide you, it splashes everywhere.

The Importance of Intuition, Innovation & RQ

Once intuition was lost, managers and consultants began to make up theories about how innovation works. Without feedback to disprove these theories, they could convince themselves the theories were valid. Once I developed the Research Quotient (RQ) measure, and saw its dramatic decline, I began to reality check the leading theories. I did this using data across the full spectrum of US firms over 47 years. Not surprisingly I found that many of the most common innovation prescriptions actually degrade companies’ innovative capability.

The good news is this problem is fixable! The way to restore companies RQ, as well as economic growth, is to reverse many of the recently implemented practices. Ultimately, once these are reversed, companies may even be able to use RQ to restore their intuition.

Anne Marie Knott is Robert and Barbara Frick Professor in Business at Washington University and author of How Innovation Really Works: Using the Trillion-Dollar R&D Fix to Drive Growth. Her work has been published in Harvard Business Review Management Science Organization Science and Strategic Management Journal among others. Prior to receiving her PhD from UCLA Professor Knott was a project engineer and program manager at Hughes Aircraft Company developing missile guidance systems.

Anne Marie Knott is Robert and Barbara Frick Professor in Business at Washington University where her principle area of research is innovation. Her work has been published in Harvard Business Review Management Science Organization Science and Strategic Management Journal among others. Prior to receiving her PhD from UCLA Professor Knott was a project engineer and program manager at Hughes Aircraft Company developing missile guidance systems. 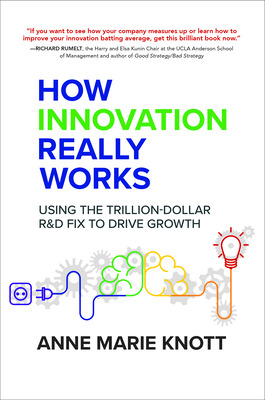