Leadership and workplace agility expert Christine Comaford explains how to create new routines and learn to respond from choice so you can become a more effective leader.

In my previous blogs, we learned how a leader shut down when she received feedback and how she changed her behavior. Now we’ll look at the new behavior we created for Andrea so that she could respond from choice. First, we needed to create a new routine and a new reward.

How to Respond from Choice

The new routine Andrea wanted to create was to notice the trigger and immediately get curious. She wanted to immediately shift her attention away from the painful meaning she was making. The new reward? She’d feel strong, she could respond from choice versus compulsively reacting, and she’d be clear on what was needed so she could provide it to others. She wanted to feel proud that she could choose her behavior.

We recalled times in her life when she had similar positive experiences of behavioral choice. We had her “load up” those memories by recalling their visuals, auditory tracks, and positive kinesthetic feelings (VAK structures). Then we “set an anchor” by having her squeeze her left wrist as she recalled the VAK structures of a specific memory of experiencing a useful emotional state. To make this new routine and reward irresistible, she added multiple similar positive memories one on top of the other, so the potency of the anchor increased.

Once she had all of these resources stacked up on her left wrist, she let go of her anchor and jumped up and down a few times to “break” the state she was in. Then she squeezed her left wrist to test the anchor. It worked! She immediately shifted to a state that included the positive resources we had anchored.

Since human beings are meaning-making machines, if we observe two things happening at the same time, our brains decide they are related, establishing new neural connections. This form of association is how anchoring works. If we create new associations (new Vs, As, and Ks), we can change the behavior of a person because we are changing the neural connections in the brain. Remember, neurons that fire together, wire together.

Here’s how Andrea used VAK Anchoring the next time her plans were changed:

Andrea’s plan was changed by others at her organization, and Vs, As, and Ks automatically fired: she saw an e-mail regarding changes, and she said to herself, “Oh! Changes coming!”

Andrea noticed the trigger, got curious, and she said to herself, “Hmmm . . . let’s consider the possibilities here.” She used the kinesthetic anchor we set (right hand squeezes left wrist). Now she had a new K and she felt better, so her creature neurology (reptilian + mammalian brain combo) launched the new routine. With Andrea’s new response of curiosity, she sought more information from others. She reached out to to learn what they would like and why they wanted the changes. (Notice the new Ks, beliefs, and identity that arose here.)

Enjoy the Reward of Choosing Behavior

Andrea felt strong and clear (more good Ks), and now she had a deeper understanding of what the person wanted so they could collaborate on a solution. She also had a positive feeling of being understood, and she was proud of her ability to choose her behavior (even more good Ks, as well as positive beliefs and identity).

Christine Comaford is a Leadership and Workplace Agility Expert. She is the author of Power Your Tribe: Create Resilient Teams in Turbulent  and SmartTribes: How Teams Become Brilliant Together. The potent neuroscience techniques she teaches are immediately applicable to help leaders expand their vision and more effectively influence outcomes. Christine Comaford is a Leadership and Workplace Agility Expert. She is the author of Power Your Tribe: Create Resilient Teams in Turbulent Times and SmartTribes: How Teams Become Brilliant Together. The potent neuroscience techniques she teaches are immediately applicable to help leaders expand their vision and more effectively influence outcomes. 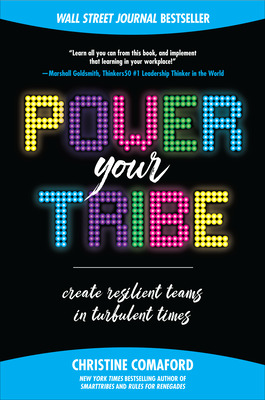