Veteran journalist Glenn Rifkin explains why Patrick McGovern was such a visionary leader and why his lessons are so valuable in today’s world.

“Patrick McGovern was a gift to us all, a trailblazing visionary who showed an entire generation of entrepreneurs what it means to be a principles-based leader and how to lead with higher values.”

When I went to work as a writer at Computerworld in early 1983, I knew little about the high tech industry and less about computers. But serendipity put me at the leading trade publication in the information technology industry at just the right time. The personal computer revolution was just getting underway and entrepreneurs like Steve Jobs, Bill Gates, and Mitch Kapor were in the early stages of changing the world.

What I didn’t realize right away was that another remarkable entrepreneur was running the very company I had joined, International Data Group. It didn’t take long for me to find out. Patrick J. McGovern, Jr. was not as recognizable a name as Jobs and Gates but he had already had a major impact on the spread of the gospel of information technology. Pat McGovern was every bit the visionary entrepreneur as these other more glamorous figures and he had taken a simple concept and built it into a burgeoning global enterprise.

IDG, and its stable of technology publications such as Computerworld, InfoWorld, PCWorld, Macworld, and many others, was chronicling a revolution and helping to shape public opinion about the offerings of the coming waves of technology players. It was one thing to make and sell these breakthrough products, but they required a ubiquitous voice to educate a global audience about the products, services and industry trends, and that’s what McGovern provided. At its peak, IDG spawned 460 websites, 200 mobile sites and apps, and nearly 300 print titles in business technology, consumer technology, digital entertainment and video games.

If you were lucky enough to work at IDG, as I discovered, you got an immediate introduction to a corporate culture unlike most that existed back then. Under McGovern’s guidance, the company had a familial atmosphere that placed a premium on the value of the employees. This company, I quickly learned, had a set of ten corporate values that were posted in every IDG office around the world. The values focused on identifying the mission and following it unflinchingly; valuing employees and customers above all else; and fostering a “Let’s Try it!” attitude within the company.

My first formal introduction to McGovern came as the holiday season approached. A couple of weeks before Christmas, Uncle Pat, as he was affectionately known, visited every IDG office in the U.S. and paid a personal visit to every employee. Every employee! For many years, that number exceeded 5,000 employees and he took whatever time was required to stop at every desk, have a conversation with each person, compliment them on their work, and then hand them a holiday card filled with cash as a holiday bonus. Needless to say, this made a strong impression on the employees. Though the IDG staff was relatively young, we’d all worked somewhere else and everyone realized that CEOs just didn’t do things like this. If you were lucky, you got a holiday message from the CEO pinned to the bulletin board in the lunchroom. McGovern not only made this personal connection, but with his photographic memory, he remembered each employee by name year after year. When the CEO knows your name, that leaves an unmistakable impression.

More remarkable was that Pat McGovern was an indefatigable road warrior who devoted his entire life to the mission of the company. He flew more than 250,000 miles each year and planted the IDG flag in nearly 100 countries. He shared his leadership lessons with young executives on every continent and he believed religiously in a decentralized management philosophy. Put the decision-making process out in the markets where the customers were. Have local publishers and editors make the key decisions because they knew better than a distant headquarters staff what local readers wanted and needed. It was a potent statement of empowerment and it produced not only high quality products but a deeply loyal global workforce.

McGovern’s foray into China in 1980 was groundbreaking. Though many thought him foolish for chasing rainbows, McGovern foresaw a massive population desperate to learn about technology. A first mover strategy would cement his standing in this market and that is indeed what happened. IDG was the first western publisher to establish a base in China and the company built a profitable and thriving business in the burgeoning market. Ever the visionary, McGovern set up China’s first venture capital firm as well, and turned that into an even more profitable enterprise.

My book, Future Forward, lays out the ten most important leadership lessons taught by Pat McGovern for nearly half a century. It would be difficult to find a more influential and beloved leader in the corporate world in recent memory. Added to his legacy was the McGovern Institute for Brain Research at MIT, a lifelong passion turned into reality by McGovern and his wife Lore, with a $350 million gift in 2000. McGovern lived his life and ran his enterprises in one mode: future forward, and his lessons will stand the test of time.

Glenn Rifkin is a veteran journalist and author who has been a regular contributor to the New York Times for nearly 30 years. He is the author of several business books including Radical Marketing: Future Forward, From Harvard to Harley, Lessons From Ten That Broke the Rules and Made It Big, He has written extensively on leadership and business for a variety of publications. During the 1980s, Rifkin was the features editor at Computerworld, an IDG publication, where he first got to work with Patrick McGovern. Glenn Rifkin is a veteran journalist and author who has been a regular contributor to the New York Times for nearly 30 years. He is the author of several business books including Radical Marketing: From Harvard to Harley, Lessons From Ten That Broke the Rules and Made It Big, He has written extensively on leadership and business for a variety of publications. During the 1980s, Rifkin was the features editor at Computerworld, an IDG publication, where he first got to work with Patrick McGovern. 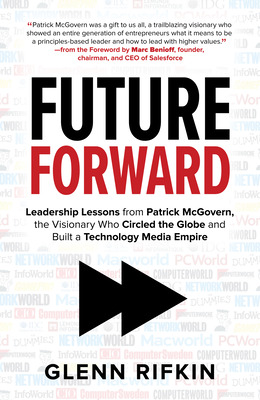