Early in 2015, we had a meeting with Keurig Green Mountain, the maker of single-serve coffee makers. The company, long considered the innovator in home brewing, had just released a brand new version of its popular coffee maker and was in the midst of launching its new soda machine, Keurig “Kold.” Like every other consumer products company, Keurig was facing fickle consumers whose tastes were harder and harder to discern, but Keurig was trying hard to innovate and establish closer relationships with its best customers—as well as find new ones.

During our meeting, without realizing it, Keurig’s chief digital and information officer, Mike Cunningham, challenged us with a question that beautifully encapsulates the new normal for the modern marketer. “So, I want to put a data collection chip in our machines, but it costs about $5,” he said. “Since we make tens of millions of coffee makers a year, our CFO wants to understand the value of the idea relative to its cost. Can you tell me what it’s worth?”

The company wanted analytics on board the machine to understand how well it was doing its job. Was it brewing the coffee hot enough? At certain altitudes, water takes longer to get to the ideal temperature, and Keurig wanted to make sure every cup was brewed to perfection. How many K-Cups was the machine making every month? As the leading distributor of single-brew coffee capsules at retail, Keurig was making more money at higher margins selling coffee than it was from selling machines. If a machine was breaking down for a 200-cup-a-month family, it would make sense to give the family another machine for free—or at least offer a heavy discount on an updated model.

Although Mike’s vision for technology started with the theory that more data, and access to it, could help Keurig get closer to its buyers and provide a better customer experience, ultimately it was about achieving better performance, greater sales, or more data through a trusting relationship that respected Keurig buyers’ privacy and choices. Everything else came second.

Keurig is one of the biggest retailers in the world (in the top 100 of Internet retailers), but it had no way of knowing what coffee people were brewing in its machines. While it was possible for a machine to scan proprietary K-Cups when placed in the brewer, what about third-party cups from partners? Maybe an optical scanner placed in the lid of the machine could reveal the different products being consumed—Folgers in the morning, Starbucks in the afternoon, and maybe a soothing cup of Twinings chamomile tea at night? That would give the company more direct visibility into which partners were performing well and would provide deeper insights into consumers’ home brewing preferences.

Cunningham’s ambitions didn’t end there. What about the people brewing the coffee? Could a beacon inside the machine read the mobile devices of people in the house and find out who was brewing what? How many people were in a typical Keurig household? Survey data was great but known to be patchy and incomplete, and frequently biased toward a small sample of households. Could tying consumers through their mobile devices to other data sources help Keurig understand household income? Was it possible to get a location on the machine and discover which local retailers had the best selection of K-Cups?

Finally, Mike dreamed of outfitting the machine with a small LCD screen. Keurig has the rapt attention of tens of millions of consumers every morning as they wait the 30 seconds for their coffee to brew. Maybe the screen could suggest new brands, prompt consumers to order more when they were running low, or even serve up a video ad in exchange for a free cup of hotel coffee. In a world with connected refrigerators, the concept wasn’t a stretch. Keurig was watching in-home appliance makers like Samsung lean into Internet of Things (IoT) technology to get closer to their customers alongside many other makers of home appliances.

As an astute chief data officer, Mike was asking all the right questions. How could data transform his company, bring it closer to its consumers, provide a better and more relevant coffee drinking experience, and give his team the insights it needed to compete against a sea of fast-moving competitors? It wasn’t just other coffee makers they were competing with. Keurig partners with Starbucks, McDonald’s, and others, but still competes for that first and last coffee of the day. Being a favored and available drink choice multiple times a day is the central imperative of beverage companies everywhere. Keurig was more agile than most with its retail partner relationships, but it still didn’t have a good view of all its customers across retail.

In other words, sometimes Keurig’s relationship with customers was arm’s length. If a K-Cup was sold on Keurig.com or a retailer partner who shared data with the company, then there was no problem. But what about the millions of other cups sold at retail? Once Keurig sold a few cases of K-Cups to the local grocery store or hotel location, the company didn’t get much access to the consumer experience. Sure, it knew how many cups it was selling, but what else were those customers filling their shopping carts with? How much did they spend at the supermarket? What was Keurig’s share of basket against competitive brands? Were hotel visitors actually making a K-Cup at their hotel when they woke up, or were they waiting until they got to Dunkin’ Donuts for that first cup of coffee? Also, who were the customers exactly? How much money did they have? Where did they live? What websites and apps did they spend their time on? What celebrities did they like, and what TV shows were they watching?

Mike was a trailblazer who fully imagined what Keurig could do with better access to this kind of people data from its devices. First, the company would know and understand more about the people who drink coffee at home than any other company in the world—what they drink, when they drink it, and what brands they drink. Any brand that supplied a K-Cup would seek ongoing access to that data so it could achieve deeper insights about its own customers. More important, the company would start on a journey to own more of its purchase data, especially if folks could order right from the machine or, better yet, have the machine order for them when they started to run low. This was fundamental to Mike’s first principle of delighting customers through better experience delivery.

In the most basic sense, what Keurig could achieve with data, accelerated by an IoT strategy, was a sustained, truly personal relationship with its customers.

As we were growing Krux’s marketer base a few years ago, we called this story “The Magic Coffee Maker” because it captured so much of what we believed: enterprises owning more of their data, the promise of connected devices and touchpoints, better consumer experiences through personalization, and the stitching together of data from many different devices to create an intelligent 360-degree profile of the consumer. Coffee makers are just one example among thousands. We’re increasingly surrounded by a dizzying array of gizmos connected to the Internet: cell phones, tablets, desktop computers, TVs, gaming devices, thermometers, refrigerators, cars, and many other gadgets yet to be invented. Because of this hyperportable, pervasive connectivity that we now enjoy, the number of touchpoints that a company can use to engage with us is exploding exponentially.

More touchpoints and roughly the same number of people on the planet change the equation: who’s looking at the screen becomes more important, and much more valuable, than what’s on the screen. Every company, wherever it sits in a broader value network of partners, distributors, and customers, is trying to get closer to the person looking at the screen, or in Keurig’s case, making the coffee. After years of just talk, marketers are charting data-driven strategies for delivering the right experience to the right person at the right time and the right place.

Many Internet companies recognized this challenge early and moved quickly to conquer it. They include familiar names such as Google, Facebook, and Apple and more specialized companies such as Netflix and LinkedIn. Amazon, however, stands apart in delivering the gold standard for people-centric precision. With every click and every pageview, Amazon creates a personal connection with each consumer. We feel like Amazon knows us because it does. Amazon uses its understanding to cross-sell and upsell, inspiring us to spend a little extra money while we are on the site, or always to think of Amazon first whenever we need a new tool, ingredient, or personal effect. And in an evolving regime where issues of privacy and data usage loom ever larger, we trust Amazon. With every return visit, we express that trust by sharing more about our wants and interests, which in turn nourishes Amazon’s massive people engine with the fuel it needs to give us an even smarter, more personal touch on the next visit.

The purpose of this book, in its most basic sense, is to help you and your company channel your inner Amazon. In the pages that follow, we will help you understand the challenge of people-centric marketing in a practical way, share best practices that leading companies employ as they confront the challenge, and arm you with simple concepts and principles you can use to harness its potential for your own company and your own career. We will describe in detail the data strategies that companies such as Georgia-Pacific, Warner Bros., and Turner implemented to reinvent their relationships with consumers. We will talk about how Heineken is using data to better understand how much beer it can sell to soccer fans, how Kellogg Company uses data to save millions of dollars every year not targeting certain consumers, and how RB is working to find out when people sneeze so it can sell more Mucinex. By pioneering many of the techniques and tools in this book, dozens of trailblazers have achieved virtuosity in data-driven marketing. It gives us great confidence that you will, too.

Tom Chavez is the founder and CEO of Superset Inc., a venture studio that founds, funds, and builds technology companies. A serial tech entrepreneur who has spent the last 20 years developing new technologies for data, analytics, and AI, he was CEO and cofounder of Krux, the data management platform acquired by Salesforce in 2016, which is now the technical backbone of Salesforce Marketing Cloud.

Vivek Vaidya is a serial tech entrepreneur who has spent the last 25 years building industry-leading technologies in enterprise software, data management, analytics, and machine learning/AI. In his most recent role as CTO of Salesforce Marketing Cloud, he led and managed the engineering teams for all Salesforce Marketing Cloud products. Vivek joined Salesforce in 2016 through the acquisition of Krux, of which he was cofounder and CTO. Tom Chavez is the founder and CEO of Superset Inc., a venture studio that founds, funds, and builds technology companies. A serial tech entrepreneur who has spent the last 20 years developing new technologies for data, analytics, and AI, he was CEO and cofounder of Krux, the data management platform acquired by Salesforce in 2016, which is now the technical backbone of Salesforce Marketing Cloud. Vivek Vaidya is a serial tech entrepreneur who has spent the last 25 years building industry-leading technologies in enterprise software, data management, analytics, and machine learning/AI. In his most recent role as CTO of Salesforce Marketing Cloud, he led and managed the engineering teams for all Salesforce Marketing Cloud products. Vivek joined Salesforce in 2016 through the acquisition of Krux, of which he was cofounder and CTO. 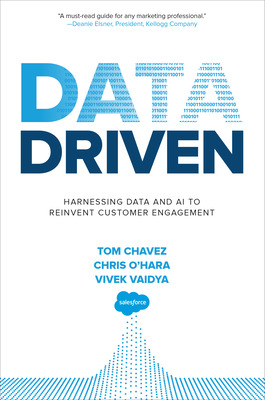