Companies seeking to create a vibrant, engaged workforce deploy a range of tactics, including improved benefits, flexible work schedules, and enhanced professional development opportunities. But as Kronos CEO, and author of WorkInspired: How to Build an Organization Where Everyone Loves to Work, Aron Ain points out, one of the most profound engagement techniques might be one of the simplest: More humility on the part of leaders.

When I was growing up, my parents impressed upon my siblings and me the importance of always staying humble. As they saw it, everyone mattered, regardless of their education level, status, or wealth. My brothers and sisters and I had to treat everyone equally.

What I couldn’t have realized then was how relevant humility is for business leaders, especially when it comes to the difficult but critically important task of building an engaged workforce. How can you create an environment in which people absolutely love to come to work? What levers do you pull, not just organizationally but in terms of your own behavior?

Over the past decade at Kronos, we’ve invested heavily in our people and our culture, winning many “Best Places to Work” awards and boosting our engagement scores. As we’ve learned along the way, there is no one, “magic” lever to pull to create an inspired workforce— employees’ affection for their jobs hinge on a range of considerations. But if one principle has helped us create a culture in which people feel passionate about doing their best, it’s the cultivation of humility, and specifically, the embrace of an aspirational figure whom I call “The Un-Leader.”

As I think of it, Un-Leaders distinguish themselves by putting themselves on the same level as team members. They aren’t dazzled by titles, their own or anyone else’s, as traditional leaders are. Rather, they recognize that all team members contribute, and that they all deserve respect and recognition— it isn’t all about the CEO (or the Vice President or whatever title you happen to possess). Ultimately, Un-Leaders take their egos out of the picture as much as possible, re-orienting themselves to emphasize service to others and to the organization.

When you behave more like an Un-Leader, even just a little bit, team members notice. They develop more affection for you and the team. They open up more. They trust you more and show you more loyalty. They also become more engaged in their work, and their performance soars. If these benefits weren’t enough, striving to become an Un-Leader is easier than behaving like a conventional leader. As an Un-Leader, you don’t have to expend as much mental energy sustaining your authority, asserting your dominance, or imposing your will. That’s because your influence derives from your ability to inspire others and garner their affection, not from your status and authority.

Four Tactics for Becoming an Un-Leader

If you haven’t focused on humility recently, try embracing the following simple practices as regular habits with your team:

Becoming an Un-Leader isn’t complicated, but it does require discipline and focus. Commit to it, stick with it, and also be sure to look beyond your own behavior as well. Infuse policies and procedures with the spirit of humility, and define humility formally, so that everyone’s expectations are aligned.

I’m very much a work in progress, as are our corps of managers and leaders. Still, we do our best to behave humbly, and I’m convinced that this has helped push our engagement scores far above the average in our industry. If you want employees to love working on your team or within your organization, by all means, focus on benefits, work schedules, professional development, and the like. But please strive as well to become an Un-Leader. Your people will thank you for it!

Aron Ain is CEO of Kronos Incorporated, a $1.4 billion technology company. A multiyear recipient of Glassdoor’s Top CEOs distinction, Ain fiercely contends that great businesses are powered by great people and that there is a direct link between employee engagement, customer satisfaction, and business success – and he has proof. His WorkInspired book chronicles the Kronos employee engagement journey and imparts lessons Ain has learned for senior managers, HR professionals, and people managers to turn employee engagement into a strategic weapon. Aron Ain is CEO of Kronos Incorporated, a $1.4 billion technology company. A multiyear recipient of Glassdoor’s Top CEOs distinction, Ain fiercely contends that great businesses are powered by great people and that there is a direct link between employee engagement, customer satisfaction, and business success – and he has proof. His WorkInspired book chronicles the Kronos employee engagement journey and imparts lessons Ain has learned for senior managers, HR professionals, and people managers to turn employee engagement into a strategic weapon. 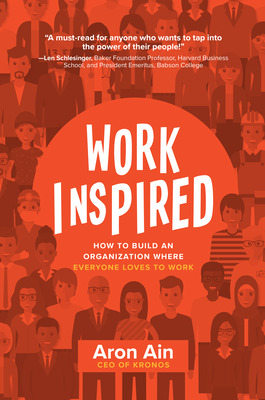