Dogs. Chimps. Humans. We’re a lot alike. In addition to our four-chambered heart and love of social interaction, advanced mammals share a need for positive reinforcement. Managers have known this since the very first sales associate, using recognition programs to reinforce desired behaviors. But in my time studying company culture, I noticed there are many kinds of recognition, more than even a total rewards program includes. So, I went about looking for and sorting the different types to see if I could make sense of them all. Here’s what I found.

I’m sure there are many ways to organize corporate recognition programs, but I found four types.

For the purposes of this article, I will discuss two types of recognition programs and you can read about the others–and components of culture– in my book.

First, think about from whom the recognition comes. It can be either a manager above or a peer sitting the next cube over. Second, consider whether the recognition is formal or informal. Formal programs are developed by departments or companies to incentivize behaviors (sell more!), while informal programs happen with little or no management oversight. That’s it: those are the two basic axes.

Congratulations! You’ve done it. You’ve sold the most, coded the best, innovated the hardest. Whatever it is, you are being called out. Formal programs developed and implemented by heads of state are the most common example of recognition inside companies. In the early 2000’s I was involved in creating an innovation awards program for HP globally. We would put out a call for entries, film the judges, host a celebratory dinner, and bestow the trophies. Sometimes these programs can have monetary rewards or other gifts. Like this, formal recognition programs tend to be on a grand scale, but really, they don’t have to be. At a modest retail start-up I known, they hold a quarterly company-wide night out at the local pub and hand out tokens of appreciation to teams for great work.

While formal recognition from on high is valuable, it is built on the assumption that the things we get rewarded with are what motivate us. But as Daniel Pink and others have shown, that’s not the case. Not that bonuses are being refused, but people respond just as well to praise accompanied by symbols that hold zero monetary value. Take for example my friends over at Delivering Happiness. At one point they passed around the culture bacon (a pillow in the shape of bacon actually) to team members who exemplify their culture. It is then the new bacon owner’s choice who gets acknowledged next. But a “bacon@” email address for nominations works as well. I love this exactly because the trophy is so silly. The tchotchkes have little monetary value but hold a lot in the way of social capital. It proves that if they can pass around a bacon pillow to reinforce awesome choices, anyone can find a trinket and create a peer to peer recognition program.

Whichever type of recognition you think will work for your culture, remember to be consistent and authentic. To do any of these programs well isn’t easy, but over time become a powerful lever for designing and managing your company culture.

Josh Levine is an educator, designer, and author, but above all, he is on a mission to help organizations design a culture advantage. Even though his day job is Principal of Great Mondays, a 10-year-old culture design company, Josh is best known as Executive Director and Co-Founder of the international non-profit Culture LabX. His new book Great Mondays: How to Design a Company Culture Employees Love is available for pre-order on Amazon. You can find him around the web @akajoshlevine Josh Levine is an educator, designer, and author, but above all, he is on a mission to help organizations design a culture advantage. Even though his day job is Principal of Great Mondays, a 10-year-old culture design company, Josh is best known as Executive Director and Co-Founder of the international non-profit Culture LabX. His new book Great Mondays: How to Design a Company Culture Employees Love is available on amazon. You can find him around the web @akajoshlevine 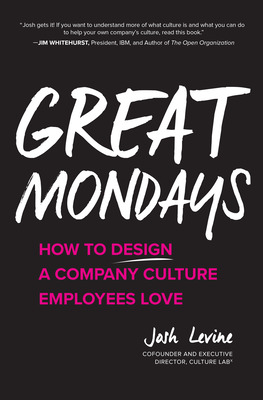