Michael George, CEO of A I Technologies, explains why Artificial Intelligence provides a competitive edge and how it drives improvements across industries.

Lean Six Sigma must be turbocharged with Artificial Intelligence to keep American manufacturing and engineering competitive in the world market. The combination of AI and cloud computing makes Deep Learning a powerful tool for reducing waste and increasing profitability beyond that which was possible using the Lean Six Sigma of 2001.

An early application of AI data mining showed that huge amounts of waste existed that could neither be detected nor removed by the Pareto analytics of  Lean Six Sigma. In one example 19% of part numbers were the “vital few” which contributed 80% of revenue.  “Big Data” showed that the 80% of part numbers which contributed 20% of revenue were not the so called “irrelevant many” because, they  contributed 73% of the total factory dollars of setup waste. Attempting to apply Toyota’s engineering intensive setup reduction method to these low volume part numbers was not cost effective due to low repetition rates and long payback cycles.  Rather, an entirely new set of AI waste elimination tools including sequencing by Neural Networks was developed, as described in Chapter 2.

The elimination of this waste provided a huge potential profit increase and created a defensible business model against all competitors. Artificial Intelligence, enabled by Cloud computing, has ushered in the Fourth Industrial Revolution. The noted AI venture capitalist Dr. Kai-Fu Li stated “the Age of Discovery in AI is over, and has been replaced by the Age of Implementation.” Prior to AI, business operated with the two factors of production, labor and capital. AI has been shown to be the third factor of production. A company operating with all three factors of production will have superior performance to a competitor using only labor and capital without AI.

The world of process improvement has clearly changed since 2001, and  companies and the military must also change. Charles Darwin would concur that AI demands a response that is required for every company’s prosperity and growth.

What has happened since Lean Six Sigma was written in 2001? After more than 50 years of scientific development of Artificial Intelligence , Deep Neural Networks became a practical tool due to the “training” method of Professor Hinton of Toronto University. Also by 2012, Cloud computing had become available for high-speed Neural Network training from Amazon, Microsoft, etc., multiplying cheap computing power a hundredfold compared to a PC.

The elimination of this process waste using Lean Six Sigma turbocharged with AI provides a huge potential profit increase and creates a defensible business model against all competitors. Artificial Intelligence, enabled by Cloud computing, has ushered in the Fourth Industrial Revolution.

Non-manufacturing applications. AI and Neural Networks also detect common patterns in product development, project management, and other non-manufacturing applications as described in Chapter 13. While the methods of waste reduction change, the overall result is the same: AI yields greater reduction of cost and cycle time than was possible with only Lean Six Sigma (LSS) to attain competitive advantage.

Artificial Intelligence is applied to actual case studies in this book, illustrating all the learning with practical examples resulting in tremendous profit improvements.

Michael George is the CEO of A I Technologies, founder and Chairman of the George Group (sold to Accenture in 2007), and the Principal at Blackland Private Equity Group. Previously, he was CEO of International Power Machines, sold to Rolls-Royce. Michael George is the CEO of George AI Consultants, founder and Chairman of the George Group (sold to Accenture in 2007), and the Principal at Blackland Private Equity Group. Previously, he was CEO of International Power Machines, sold to Rolls-Royce. 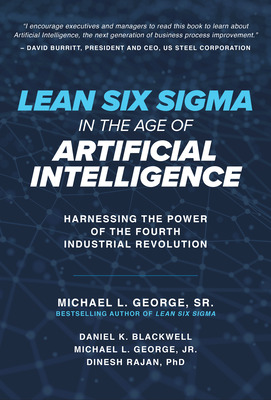