Leadership expert and speaker, Steve Farber, provides a sneak peak to his upcoming book, Love Is Just Damn Good Business: Do What You Love in the Service of People Who Love What You Do.

Joe Jaros was a driver for Marco’s Pizza, and he loved his customers so much that they literally asked for him by name.

Who does that? Who calls for a pie and requests it be delivered by a specific driver? More importantly, why would they ask for him? Because the love Joe Jaros had for his customers showed up in the service he provided.

Joe did much more than quickly deliver piping-hot pizzas and subs. He would arrive at a customer’s home and, as he walked up to the door, if he noticed, for example, that the light bulb on the porch was burned out, guess what he would do? He’d change the light bulb. Why? Because that’s what you do when you love somebody. You help them out. I guarantee you nowhere in his job description did it say, “change customers’ light bulbs.”

And Joe was delivering pizzas in Ohio, where they have this thing called winter. Maybe you’ve heard of it. Winter in places like Ohio comes with snow that piles up everywhere, often in drifts of three feet or more. So, Joe would shovel the walk.

When he was delivering pizzas, there probably were times when Joe thought, I’ll be a delivery boy for the rest of my life. That didn’t matter. He loved his customers, and he took care of them—not because he thought he’d someday be given the opportunity to own a Marco’s store, but because it was the right thing to do. That’s what you do when you love somebody. And it just so happens that it’s also damn good business.

Now here is, as Paul Harvey used to say, the rest of the story. A little old lady living alone in Ohio once fell in her home. An ambulance took her to the hospital, where they fixed her up. But when they asked her who they could call to take her home, but she said she had no friends or family. This lovely lady lived virtually alone on the planet, and, in fact, she only knew one phone number by heart—the number of her local Marco’s Pizza. So, the hospital staff called Marco’s and explained what was going on. Without hesitation, they sent one of their folks to pick up this lady and take her home.

There was no pizza involved. Not even a salad. And you know what? The store that sent a driver without hesitating to pick her up is one of the stores owned by Joe Jaros.

Steve Farber, founder of The Extreme Leadership Institute, is a popular keynote speaker and leadership expert. He’s the bestselling author of The Radical Leap, The Radical Edge, and Greater Than Yourself. Steve Farber, founder of The Extreme Leadership Institute, is a popular keynote speaker and leadership expert. He’s the bestselling author of The Radical Leap, The Radical Edge, and Greater Than Yourself. 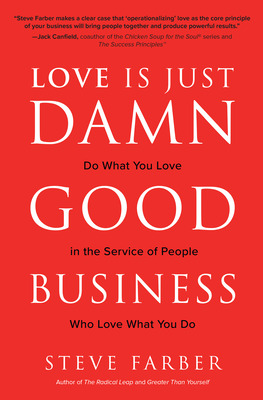