Three to five times a week, I was creating and distributing helpful information targeted to marketers in large companies—the audience I wanted to reach eventually with my new product. A few months later, I was starting to build a small, loyal following.

Fast-forward to the present day. Our company, Content Marketing Institute, has been named to the Inc. 500 fastest-growing private companies list for three years running, becoming the fastest-growing business media organization in North America. We have consistently grown our revenues at 50 percent per year for the last four years. In 2015, we’ll top $10 million in revenues.

Through a lovely accident, I stumbled on a powerful way to build a business in the digital age—and now believe there is no better way to go to market. By focusing on building an audience first and defining products and services second, an entrepreneur can change the rules of the game and significantly increase the odds of financial and personal success.

Let me repeat that: I believe the absolute best way to start a business today is not by launching a product, but by creating a system to attract and build an audience. Once a loyal audience is built, one that loves you and the information you send, you can, most likely, sell your audience anything you want. This model is called Content Inc.

But did I develop a method that is difficult to replicate, or are there other entrepreneurs and start-ups that used a similar strategy?

Growing up in the Catholic school system, I heard the David versus Goliath story often. David is the ultimate underdog; Goliath, the Philistine giant, the most powerful warrior on the planet. David, a young boy, doesn’t have a chance to defeat such a powerful and skilled warrior. But through David’s faith in God, a handful of smooth rocks, and perhaps a small miracle, David defeated Goliath.

Jack Wellman from the Christian Crier asserts that “Goliath had everything going for him. He had every advantage possible. He had great ability and he was trained, equipped, experienced, battle tested, and battle hardened, and he was completely fearless. He was totally confident but it could also be said that he was overconfident.” He was also about 6 feet 9 inches tall.

And then here comes David, small and totally outmatched. Just a boy, David won because he had supreme confidence in the Lord, who was with him, and the giant lost the seemingly unlosable battle. Reaching into his bag and taking out a stone, he slung it and struck the Philistine on the forehead. The stone sank into his forehead, and he fell facedown on the ground.

David ran and stood over him. He took hold of the Philistine’s sword and drew it from the sheath. After he killed him, he cut off his head with the sword.

When the Philistines saw that their hero was dead, they turned and ran. (1 Samuel 17) David beat Goliath because of his faith in God. Of course, David had confidence in victory because the Lord was with him. But perhaps there is another way to interpret this story . . .

Goliath: The Underdog
Malcolm Gladwell gave me a new perspective on this story in his book David and Goliath: Underdogs, Misfits, and the Art of Battling Giants. Gladwell’s version makes perfect sense to my entrepreneurial spirit.

According to Gladwell, Goliath was indeed a giant, who was also extremely slow to move. Add to that, he was wearing 100 pounds of armor. Some medical experts believe Goliath was suffering from acromegaly, a hormone imbalance that causes a human to grow
to extraordinary size. If that was the case, his vision was most likely impaired as well.

How about David? Yes, David was small in stature, but he was an accomplished “slinger” and could target and strike large beasts from
great distances. Light on his feet, David could move unsuspected on a target and still win an attack from far away.

The biblical interpretation tells us that David, the underdog, was shown favor by the Lord, which helped him defeat Goliath, the heavy
favorite. Actually, Goliath had no chance to win. God favored David by helping him discern a better strategy. The fight was over before it ever began.

Changing the Game
David won because he played an entirely different game than Goliath did. If David would have fought Goliath as tradition demanded, one warrior in hand-to-hand combat against another, he would have lost. And this is what happens to almost every entrepreneur dreaming up an idea that will make him or her successful. Entrepreneurs, whether bootstrapped or funded, have no resources compared with those of the large enterprises they are competing with.

To continue reading the rest of Content Inc., order here. 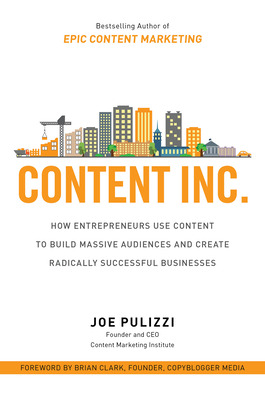