From Dr. Rick Brinkman, comes the much-needed cure for that time-wasting, headache-inducing, soul-sucking plague known as meetings. He goes further by explaining how to find the best solutions for contentious issues.

As we have explored in a previous post on how to Prevent Polarization at Meetings, we want the group to get to Holographic Thinking, which means they see all the important factors from everyone’s point of view. Accomplishing that requires three things. First; everyone must be focused on the same topic and use the same process at the same time. Second, we must hear from everyone and therefore have a speaking order which can be either voluntary or circular. And third we must do flight recording, which simply means summarizing what people say in bullet points visually on a flip chart or projected PowerPoint slide to allow us to see all the factors at once.

In this blog post we will examine how to analyze potentially contentious issues without falling into a polarization trap. Since one of the primary goals at meetings is to make sure that everyone can see everyone else’s point of view, it requires attendees to have an understanding of criteria. People’s ideas are usually nothing more than a means to an end. And that end is the fulfillment of an overall intent and a list of criteria. The magic questions to ask to extract criteria are these: “Why do you say that?” And, “What will that accomplish?” The more quickly we extract everyone’s criteria, the more quickly the group will come up with the best solutions.

Here is an example. A company’s executives had to break some bad news to their employees. Because of the economic downturn, employees would have to begin to contribute to their health insurance benefits. There was a concern among all managers that this would demoralize their employees. The managers all agreed on the intent: they wanted to minimize upset. However, there was some disagreement on what was the best way to do this. Some managers thought it would be best tackled in a company wide meeting, while others thought it should be done in many small group meetings. It started to get contentious, and management polarized into two camps.

I used a process with them called Match and Mismatch. Matching is when participants state only what they like about the current idea. Mismatching is when participants state only what they don’t like about the current idea. You do both to analyze a particular idea, but they must always be done separately. I can’t emphasize this enough. By separating the two, you get the group to step back in a neutral fashion from any preformed opinions they may have. If you let people say either a match or mismatch when it’s their turn, then they will express only that which fits their opinion.

A circular speaking order is best in this case to make sure everyone is heard. The team first visually collects all matches for an idea on a PowerPoint slide or flip chart, and once that process is complete, they switch to mismatch. In general, I suggest doing matching first. Once you identify everything that you like about an idea, it puts the mismatches in a different perspective, as just criteria to address to make the idea happen.

By using a circular order with a match and then mismatch process, they arrived at full agreement on a solution in 20 minutes!  Here’s what they said:

The big divide was whether to announce the changes in an all-hands large group meeting or in smaller groups with their immediate manager and an HR person.

The Matches for the large group format came down to:

The Matches for the small group format came down to:

When we switched to Mismatching we revealed the negatives effects they wanted to avoid.

The Mismatches related to doing small groups came down to:

The Mismatches related to the large group idea came down to:

Once all the positive and negative criteria were made visual by the Flight Recorder, the group arrived at Holographic Thinking, and the answer became obvious to everyone in the room. They would inform people in one large group so that everyone would hear the same thing at the same time in the same way from senior leadership. Then they would immediately divide up into smaller groups with people assigned to facilitators who would have their personal information and could answer all their financial questions.

It took only 20 minutes to arrive at this unanimous decision by the group. By using the Meeting Jet process of circular speaking order to expose all the positive and negative criteria by matching and mismatching, the managers were able to have the blinding flash of the obvious that gave them all the positives they wanted and eliminated the negatives.

Dr. Rick Brinkman is the coauthor of the international bestseller Dealing with People You Can’t Stand, which has been translated into 25 languages. He is a top keynote speaker and trainer on leadership, teamwork, customer service, effective meetings, difficult people, and managing multiple priorities.

Dr. Rick Brinkman is the coauthor of the international bestseller Dealing with People You Can’t Stand, which has been translated into 25 languages. His new book, Dealing with Meetings You Can’t Stand, How to Meet Less and Do More is available now. He is a top keynote speaker and trainer on leadership, teamwork, customer service, effective meetings, difficult people, and managing multiple priorities. 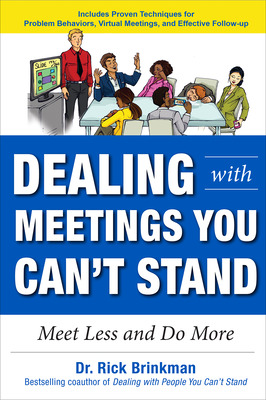