One of today’s top innovation experts, Greg Satell, delivers a guide for driving transformational change. To truly change the world or even just your little corner of it, you don’t need a charismatic leader or a catchy slogan. What you need is a cascade: small groups that are loosely connected but united by a common purpose.

When Mohandas Gandhi was a young lawyer he was so shy that he couldn’t even bring himself to speak in an open courtroom. He was also impulsive and had a nasty temper. Nelson Mandela started out as an angry nationalist, who argued vigorously about joining forces with other racial groups in a coalition to fight against Apartheid.

Yet as I explain in my book Cascades, both men learned to conquer themselves and evolved into inspirational leaders that achieved transformational change. Movements, as the name implies, must be kinetic to be successful. They need to start in one place and end up somewhere else, evolving and changing along the way.

The same is true for an organization. To create a real impact on the world, you first must drive change internally. That’s not easy and it doesn’t happen all at once, which is why most transformations fail. However, successful leaders understand that to bring true change about it is not enough to simply plan and direct action, you have to inspire and empower belief.

Building A Genome of Values
When Lou Gerstner took over as CEO of IBM in 1993, the company was near bankruptcy. Many thought it was a dinosaur and should be broken up. Yet Gerstner saw that its customers needed it to help them run their mission-critical systems and the death of IBM was the last thing they wanted. He knew that to save the company, he would have to transform it and he started with its values.

“At IBM we had lost sight of our values,” Irving Wladawsky-Berger, one of Gerstner’s chief lieutenants, told me. “IBM had always valued competitiveness, but we had started to compete with each other internally rather than working together to beat the competition. Lou put a stop to that and even let go some senior executives who were known for infighting.”

Pushing top executives out the door is never easy. Most are hard working, ambitious and smart, which is how they got to be top executives in the first place. Yet sometimes you have to fire nasty people, even if they outwardly seem like good performers. That’s how you change the culture and build a collaborative workplace.

In doing so, Gerstner led one of the greatest turnarounds in corporate history. By the late 1990s, his company was thriving again and continues to be profitable to this day. That would have never been true if he saw the problem as one of merely strategy and tactics. IBM had to change from the inside first.

Forging Shared Purpose And Shared Consciousness
When General Stanley McChrystal first took over Special Forces in Iraq, he knew he had a magnificently engineered military machine. No force in the world could match their efficiency, expertise and effectiveness. Yet, although they were winning every battle, they were losing the war.

The problem, as he explained in his book, Team of Teams, wasn’t one of capability, but interoperability. His forces would kill or capture Al Qaeda operatives and collect valuable intelligence. Yet it often took weeks for the prisoners to be questioned and the data to be analyzed. By that time, the information was often no longer relevant or actionable.

What McChrystal realized was that if his forces were going to defeat a network, they had to become a network and he set out to build connections within his organization to improve trust and interoperability. He upgraded liaison officer positions to only include the best operators and embedded commandos into intelligence teams and vice versa.

While formal structure and traditional lines of authority stayed very much in place, operating principles changed markedly. The transformation wasn’t immediate, but soon personal relationships and shared purpose replaced archaic customs, procedures and internal rivalries. Even those resistant to change found themselves outnumbered and began to alter their views and behavior.

That allowed McChrystal to also change the way he led. While in traditional organizations information is passed up through the chain of command and decisions are made at the top, McChrystal saw that model could be flipped. Now, he helped information get to the right place and decisions could be made lower down. As a result, operating efficiency increased by a factor of seventeen and soon the terrorists were on the run.

Forging Cultural Awareness
As one of the largest credit bureaus in the world, Experian’s customers depend on it to help determine which customers are good risks and which aren’t. If its standards are too lax, lending organizations lose money from making bad loans. However, the opposite is also true. There are also consequences if it fails to identify good credit risks.

“One of the things that made the US so successful throughout its history is the principle that everybody can participate in the American dream,” Alexander Lintner, Group President at Experian told me. “Yet today, if you don’t have access to credit, it is very hard to live that dream. You can’t buy a house or a new car or do many other things most people want to do.”

“If we rely solely on traditional credit scores about 26 million working age adults are left out of the credit system,” he continued. “That means our clients are missing out on as many as 26 million potential customers. So at Experian, we’ve been working on extended scores based on alternative data, such as rent and utility bills, to help establish a credit history.”

As a fairly recent immigrant to the country, Lintner knows the problems that having a lack of a formal credit history can cause. He credits his company’s efforts to promote cultural awareness programs internally through Employee Resource Groups for driving a passion to solve problems for customers and the public at large, especially related to financial inclusion.

Transformation Starts At Home
Clearly, Experian didn’t start its Employee Resource Groups as a product development strategy, but to improve the lives of its employees. “We strive to make a very diverse group of people feel that Experian is their home,” Lintner says. Nevertheless, its internal commitment helped create empathy for those who are excluded from the financial system and helped lead to a solution.

Chances are, that won’t end with using alternative data to improve credit scores, but will affect many other facets of its business. To drive a true desire to solve problems, it must be genuine. Much like Gandhi and Mandela, you have to first drive change internally if you hope to create a real impact on the world.

What most organizations fail to understand and internalize is that transformation is always a journey, never a destination. There is no immediate return on investment from cultural change. Investors won’t cheer you on for firing top employees who are disruptive or creating Employee Resource Groups. Yet great companies understand that transformation always starts at home.

Greg Satell is a popular author, speaker and innovation advisor, who helps organizations grow through bringing “big ideas into practice.” His work has appeared in Harvard Business Review, Forbes, Fast Company, Inc. and other A-list publications. You can find Greg’s blog at DigitalTonto.com and on Twitter @DigitalTonto. His book, Cascades: How to Create a Movement that Drives Transformational Change, will be released by McGraw-Hill in April, 2019. Greg Satell is a popular author, speaker and innovation advisor, who helps organizations grow through bringing “big ideas into practice.” His work has appeared in Harvard Business Review, Forbes, Fast Company, Inc. and other A-list publications. You can find Greg's blog at DigitalTonto.com and on Twitter @DigitalTonto. His book, Cascades: How to Create a Movement that Drives Transformational Change, will be released by McGraw-Hill in April, 2019. 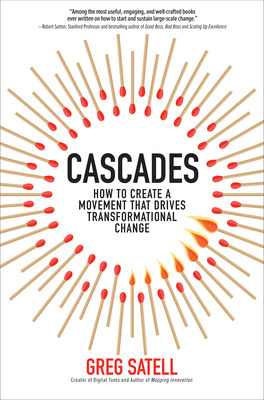