Entrepreneurship expert, Larry Farrell, illustrates that being entrepreneurial is the key to success in any career, in any field: business start-ups, large corporations and social enterprises.

My latest book, The Entrepreneurial Attitude, updates our three decades of research on the practices of the world’s greatest entrepreneurs – and then brings those proven practices to life through interviews with seventy hi-profile Junior Achievement alumni across 35 countries. It’s all backed up by The Farrell Company’s experience in teaching entrepreneurship to over six million people – more than all the business schools in the world combined! The book is about individual entrepreneurs and their achievements – but with this blog I want to broaden the scope and explore why having an entrepreneurial attitude is far more than a proven recipe for individual accomplishment. It is indeed a powerful force for raising the socio-economic health of the entire world. For sure it’s the best economic development tool ever invented. Read on . . . and hopefully you will agree.

“The most important question in economics . . .  why are

some countries richer than others?”

In its classic cover feature, “The Mystery Of Economic Growth,” The Economist said: “Understanding growth is surely the most urgent task in economics. Across the world, poverty remains the single greatest cause of misery; and the surest remedy for poverty is economic growth.” But then to underscore the crisis that has plagued the bulk of the world’s population throughout history, the article sadly concluded that: “To its shame, economics neglected the study of growth for many years . . .  with a few exceptions, the best brains in economics preferred not to focus on the most vital issue of all.”

If economists haven’t spent much time pondering why some people are rich and others are poor, has anybody? Well yes, I actually did find someone who has thought about it. In fact, he spent most of his life thinking about it. His name is K. T. Li and he was the 20th century’s most successful Minister of Economics.

“The greatest advantage I had as economic affairs minister

was I never had a course in economics.”

Republic Of China On Taiwan

K. T. Li, the “father” of Taiwan’s economic miracle, is recognized as the architect of the 20th century’s greatest economic success story. As his famous quote above implies, he believes common sense, not any arcane economic theory, is the key to economic development. The amazing results in Taiwan say he is right! This small island in the South China Sea has the fifth largest foreign reserves in the world — a stunning feat when you consider Taiwan has zero natural resources to sell and its population is only 24 million. It also has the highest GNP growth (9% per annum) of any country over the past 60 years, and defying all economic theory, it achieved these record-beating results with practically zero inflation and one of the most equal distributions of income in the industrialized world. In recognition, K. T. Li is the only person to be awarded honorary Chairs in Economics at both Cambridge and Harvard. I had the honor and delight of interviewing him for three hours in Taiwan, which was something akin to taking a crash course on the history of the modern world. Here in K. T. Li’s own words, are the principles that created the economic miracle in Taiwan:

“First, we determined that runaway inflation and rural poverty were the main reasons for the rise of Communism on the mainland which forced our retreat to Taiwan. We were determined to avoid those things in Taiwan at all costs. Our overall philosophy for creating national prosperity consists of five broad principles.

“From the beginning, we believed that entrepreneurs are the backbone of any growing economy and the government should do everything in its power to help them succeed. We knew that if we helped create one entrepreneur, he could create fifty more jobs. This was our principal policy!

“The policy has always been that everyone: the farmers, the domestic businessmen, the exporters, should all become prosperous. The government’s job was to do everything in our power to help them. Fighting inflation was also a big part of the policy. We never took the easy way on money. We never printed money we didn’t have – never.

“This is more important than any economic theory. People growth and economic growth have to be in step. Population control is controversial everywhere, but we understood the job/baby ratio had to be for every two babies born, we had to create one new job. Look around. Whether it’s Catholic, Muslim, Buddhist, where you find too many people, you find poverty.

“We favored big investments in small companies because they will create 90% of the new jobs. The government provided or arranged the venture capital to create new enterprises. It worked wonders for our economy!

“It’s obvious, your schools must educate the young people in how to make and sell the new products and services of the world.”

The Entrepreneurial Basics Applied To The Entire Economy

Let’s take a closer look at K. T. Li’s “principle policy” – Create And Honor The Entrepreneurs. How does an entire country do that? How can governments create more entrepreneurial economies? Adapting and instilling the entrepreneurial basics across the economic, educational and political fabric of the country would be a great place to start. As described in The Entrepreneurial Attitude book, those four basics are: Sense of Mission, Customer/Product Vision, High-Speed Innovation and Self-Inspired Behavior. If instilling these entrepreneurial basics throughout an entire country sounds complicated, the fundamental questions to ask aren’t. Let’s examine them one by one:

Does your country/region have a shared national mission? Is your economic strategy ‘smart or stupid?’ Is everyone committed? Does your culture support your strategy or block it? Are your national values maximizing your global competitive position? How do you rate on this characteristic?

Does your country/region produce superior goods and services at lower costs than your best competitors? Do you have the highest skilled and hardest working labor force in the world? These qualities are determining the competitive position of your country! What is your global rating here?

Do you have a national/regional sense of urgency about solving old problems and exploring new frontiers? Is there an attitude across the work force of ‘what can I do today better than yesterday?’ Do you encourage and reward innovative action? What are you doing to avoid complacency and bureaucracy? Where do you rank globally on this?

What are you, as a society, really inspired about? Are your people demonstrating higher performance and higher commitment than competitor nations? Are the positive and negative consequences in place to make all this happen? How do you compare globally on this point?

The Best News Of All – It’s A Bargain!

“We created a venture capital fund which is

almost unheard of for a city.”

Government economic development officials have become true believers that fostering entrepreneurship is a political and economic winner. As Charles Millard, the former President of New York City’s Economic Development Corporation, and the ‘Godfather of Silicon Alley,’ told me: “It’s a great investment, especially when compared to other social costs of government. That’s why we started the world’s first city financed Venture Capital fund — to help make Silicon Alley competitive with Silicon Valley.” Here are the New York City numbers Millard was talking about.

It’s really a no-brainer for government economic development chiefs when they realize they can help five citizens start job-creating businesses for the cost of keeping one criminal in prison one year!

And this is the point. We may all need to expand our thinking about the full power and promise of the entrepreneurial spirit. It isn’t just a nice thing for a few characters like Richard Branson or Elon Musk or Oprah Winfrey to live out their business dreams. It’s much more than that. It’s the surest and fastest path out of poverty for poor people everywhere, and it’s the most powerful economic development tool ever invented for every country of the world. Hopefully, armed with this expanded vision of the power and promise of the entrepreneurial attitude, we can begin to provide some answers to “the most important question in economics . . .  why are some countries richer than others?”

The Farrell Company is the world’s leading firm for researching and teaching entrepreneurship. Over six million people, from universities, companies and governments, have attended the company’s programs. The Entrepreneurial Attitude is Larry’s fifth book. Peace Corps, Harvard Business School, columnist for The Conference Board Review in NY, advisor to Cambridge University’s Enterprise Solutions to Poverty project and China’s Vocational Education Association – Larry has personally taught entrepreneurship to more people than anyone in the world. The Farrell Company is the world's leading firm for researching and teaching entrepreneurship. Over six million people have attended the company’s programs. The Entrepreneurial Attitude is Larry’s fifth book. Peace Corps, Harvard Business School, columnist for The Conference Board Review in NY, advisor to Cambridge University’s Enterprise Solutions to Poverty project - Larry has personally taught entrepreneurship to more people than anyone in the world. 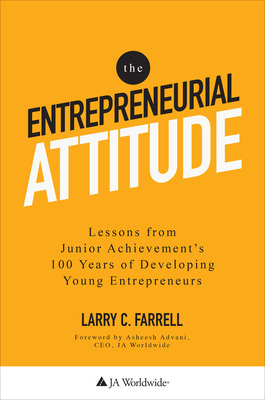